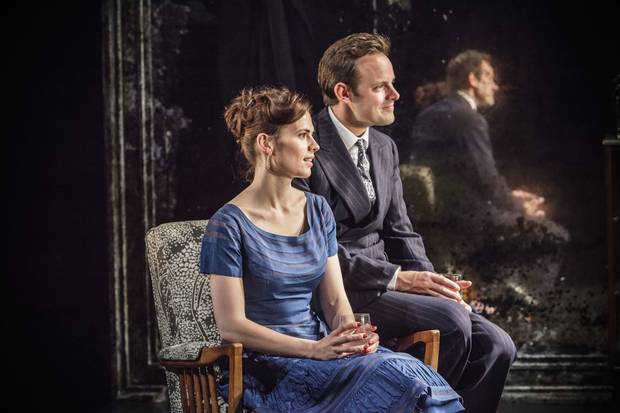 The Pride, which oscillates between relationships in 1958 and the present day, opens in 1958 with the first tense meeting between Oliver (Al Weaver) and Phillip (Harry Hadden-Paton), presided over by Phillip’s wife Sylvia (Hayley Atwell).   The attraction is palpable, the denouement inevitable. The staccato conversation appears staged and stylized:  I imagine this is deliberate as Sylvia must maintain the pretense of her carefully constructed lie. Atwell perfectly embodies the part, her elegantly defined cheekbones matching her cut glass accent.

1958’s Phillip is possessed by a fear, a homophobia in the truest sense, so deeply afraid is he of his innate sexual predilection.  Initially we are given a brief but real and haunting glimpse of the men’s connection. But Phillip’s shame destroys the possibility of the relationship, shame rapidly turning to anger and violence.  Hadden-Paton bristles with fragile tension, lashing out at both Sylvia and Oliver like a cornered and wounded animal.

It is gratifying to see that modern day Phillip no longer feels shame, since the love is no longer one which dare not speak its name. But the modern day relationship is less credible: it is hard to see how Phillip would be attracted to Oliver’s whining and incapacity for fidelity. This is not the sensitive Oliver of the 1950s. Modern day Oliver has thrown away all the progress made by the gay rights movement, his utterly uncontroversial right to have an open homosexual relationship is glibly and thanklessly disregarded for a life of promiscuity.

It was not plausible that the Oliver, who in the 1950s was so unafraid of his genuine feelings, if transposed to the present-day would be the promiscuous sexual predator.  Is Kaye Campbell suggesting that this is the result of Oliver being, so to speak, let loose? I don’t think that was or could be his intention.