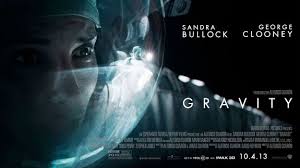 I’ve been put off attending mainstream cinemas since sitting next to a woman who repeatedly made “ooohhhh” noises and at one point punched the air and shouted “yeah”. I wouldn’t have minded if we were watching a feel good romp like Rocky, but alas this was 12 Years a Slave.

I spent a mere £5.50 for a ticket to the screening of Gravity at West End Film Club. This club is on Shaftesbury Avenue and offers a welcome escape from the chaos, tourists and general noise. The interior of this building resembles a classy hotel and the film room is especially lavish. A brass ceiling and spacious sofas create a relaxed ambience. This is a much better way to experience cinema than crowding into a mainstream cinema and contending with a woman whooping at moments of high drama.

Sipping a Birra Moretti, I was immediately gripped by Alfonso Cuaron’s multiple Oscar nominated thriller. The opening few minutes is one continuous shot as the astronauts try to repair their shuttle. This is visually stunning and the earth is captured magically in the background.

The story follows the two surviving astronauts who are cut loose from their shuttle after a debris storm decimates their operation. The sheer speed and power of this flying debris is terrifying and has you on the edge of your seat from the onset. The characters are simply trying to survive as they’re hit by one awful obstacle after another. It was reminiscent of Captain Phillips and All is Lost, with one character repeatedly facing up to seemingly insurmountable obstacles.

Whilst Sandra Bullock may lack some of the gravitas and power that Tom Hanks and Robert Redford brought to the aforementioned films, she still gives a decent performance. Her character has a poignant back story, which makes her desire for survival all the more endearing.

The real star of this film is the wonderful visual direction and the relentless, muscular narrative. I’ve never seen a film anything like this one and it really sets a new bench mark for visuals and tension. Whilst 12 Years a Slave seems a shoe in for The Oscars, I’d have to say that Gravity is the more captivating film.

With tickets just £5.50 for a classy and fantastic experience of cinema I’d definitely recommend attending future screenings at West End Film Club. Unsurprisingly tickets are snapped up quickly, so you’ll have to be fast. Their website gives details of future screenings.