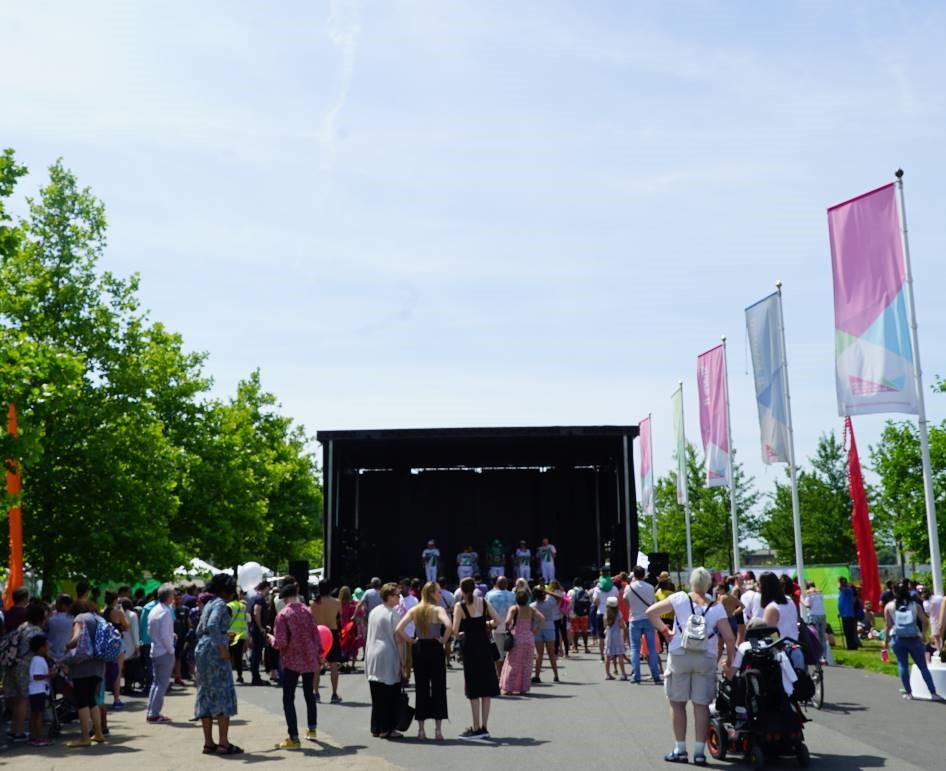 2018 marks the 100th anniversary of the right to vote for some women in the United Kingdom. To celebrate this important historical milestone, various world-class cultural and educational organisations of the likes of UAL’s London College of Fashion, the V&A, Sadler’s Wells, Smithsonian, BBC, and UCL, hosted a one-day event in Stratford’s Here East on Sunday 22nd of July. Comprising of video screenings, performances, workshops, talks, and exhibitions, my guest and I had the pleasure to indulge in an afternoon in the sun with some truly inspirational women.

Upon arrival, we visited the press centre, where the V&A youth-collective CreateVoice guided us through some of the most fascinating archival posters developed by the Suffragettes at the beginning of the 20th century, such as this What a Woman may be, and yet not have the Vote poster from 1913.

In the yard, the UCL-organised ‘Humans Make Plastic’ workshop was taking place, in which the waste gathered from the nearby river was reutilised to create collaborative artworks. Nearby, The Radical Press allowed us to produce collaborative screen prints inspired by renowned suffrage posters, while the poet Sonia Quintero motivated us to write collective poems with her workshop Writing for Rights.

In the main stage, Metta Theatre’s contemporary operas reimagined a series of opera’s female characters in the 21stcentury in a powerful and emotional way, while dancers Daniela Neugebauer and Rebecca Basett-Graham performed a duet from multi-award winning choreographer Wayne McGregor’s Autobiography, which can be seen again at Sadler’s Wells on 26-28th of July – make sure you don’t miss it! Accompanying these and other wonderful performances were a series of dance workshops, one of them hosted by hip hop dancers from the all-female Myself UK Dance Company.

To finish off our visit, we headed over to the Exhibition Space, where various UAL’s London College of Fashion degree students, inspired by a 1912 image embroidered by incarcerated suffragettes at Holloway Prison, produced a fascinating series of artworks embroidered on handkerchiefs.

In short: with so many scheduled events and so many inspiring women to speak to, the overall feeling was of true empowerment. We left with a badge and a poster but, more importantly, with the determination to ensure that the conversation continues, as it remains significantly relevant today – 100 years after one of the biggest achievements in our struggle for equality.