As a younger, more impressionable man living in the mandatory shabbiness and squalor of a shared uni flat, I fell headfirst in love with AMC’s Mad Men. The suits, the cigarettes, the confidence of the men secure at the apex of their worlds, all held great appeal to a nervous student. I even held a Mad Men-themed birthday party and while the suits were far too Topman and my hair not really suitable for slicking back, at the very least I did have all the Old Fashioned’s I could drink. And what a drink! Made in an age when cocktails were supposed to taste of booze and were drunk from a chunky tumbler with nary a straw in sight. 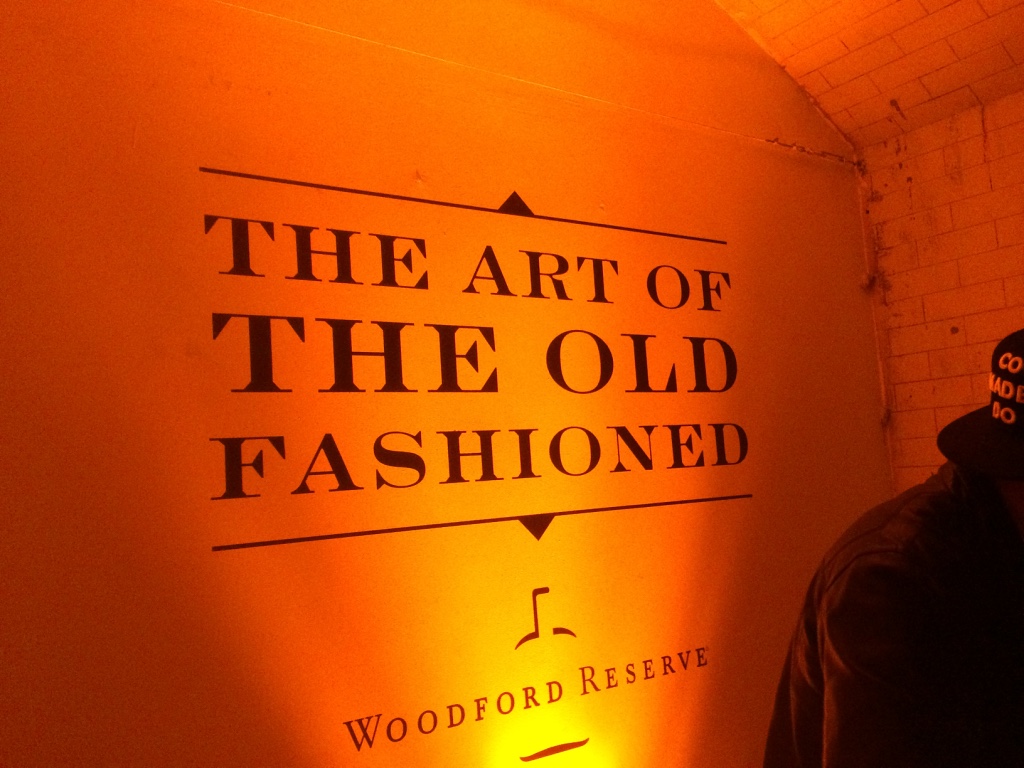 And now, years later, I jumped at the chance to review ‘The Art of the Old Fashioned’, an event held by craft bourbon Woodford Reserve as part of the London Cocktail Week. Rather than my inept hands nervously muddling bargain-bin bourbon, I would get to drink nothing but the finest whiskey’s made by the best bartenders in London.

The pop-up was held beneath railway arches in Shoreditch. The arched brick ceiling and hole-in-the-wall atmosphere immediately gave the temporary bar a sense of history and personality. The bar was bustling but we managed to snag a seat fairly quickly. Thankfully, unlike a great many cocktail places I’ve frequented, the music was a pleasant backdrop rather than something you had to shout over. 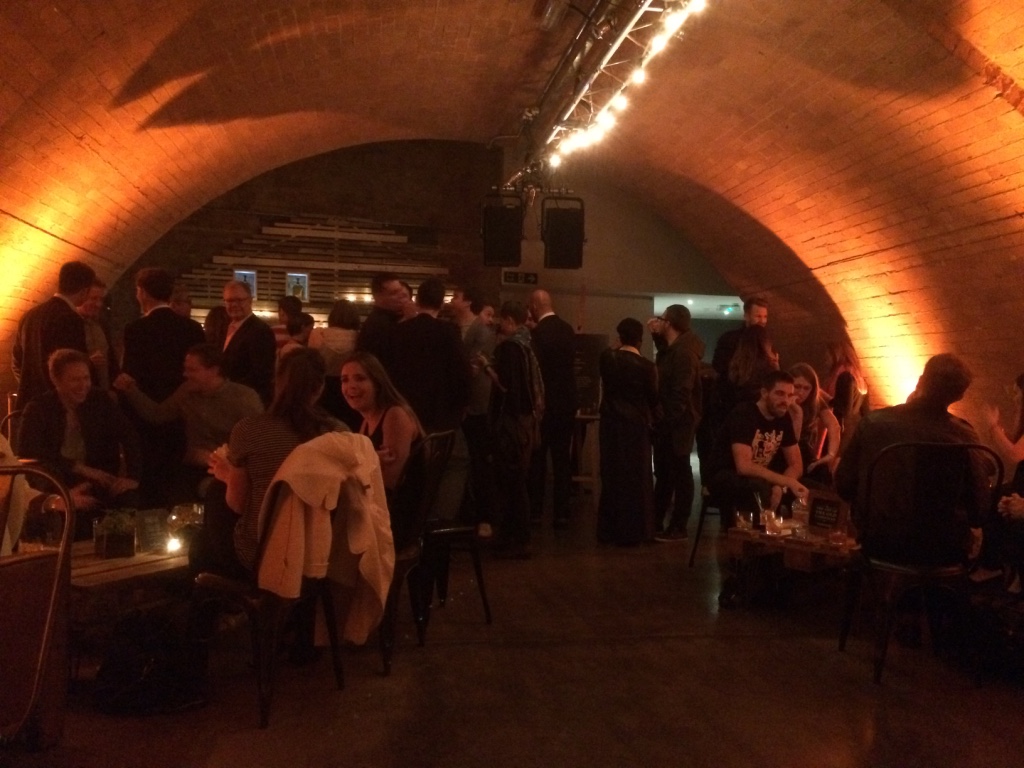 The cocktails were superb. Each of them were sourced from various bars from London and across the world. While they were all variations on a theme, the differences were enough to make each drink new and fresh but nothing that would distract from the solid foundation of the Old Fashioned. The first one I tried was the Toronto. It was a spicier than usual cocktail but it was playfully topped with a blob of cotton candy. 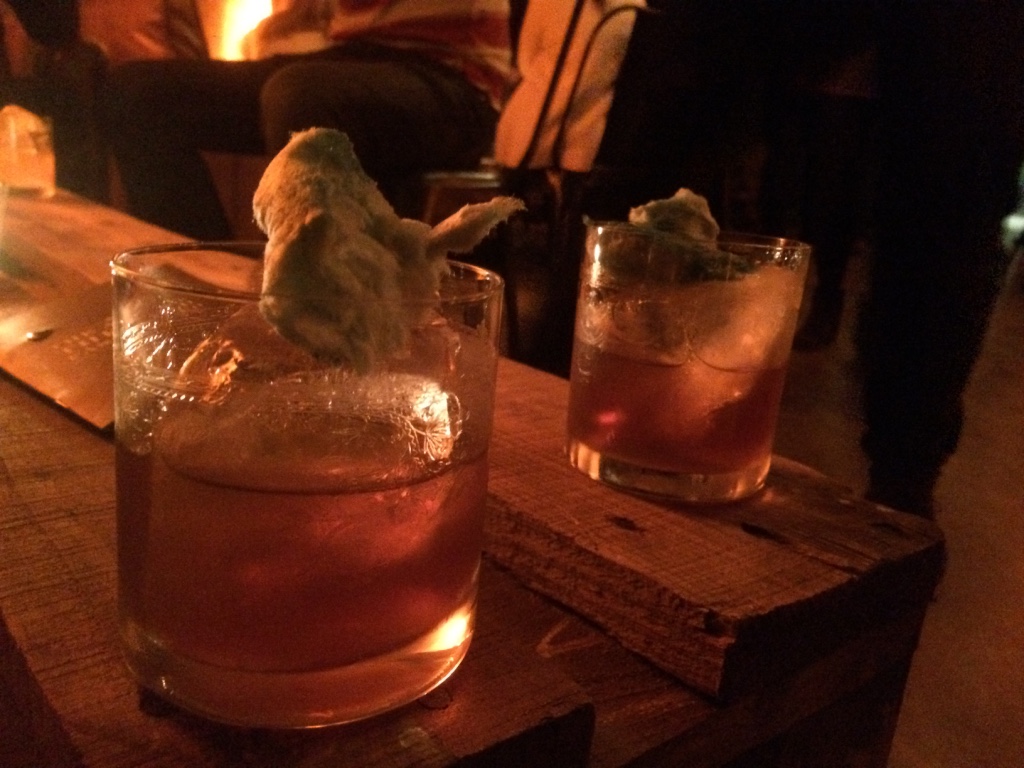 For the second I decided to push the boat out and tried the  ‘Game May Contain Shot’ Old Fashioned. This cocktail came with a dash of game fat, not something that I would immediately associate with a good cocktail. And yet when it came to it the fat gave it a smooth creaminess that was pleasant and not greasy at all. The savoury taste also played very well with the natural sourness of the cocktail.

It being a school night, I decided to limit myself to one final cocktail so I decided to go for the Old Fashioned Elixer. As always, the luxurious taste of the cocktail rang through but this one came with a dash of absinthe which gave it a more dangerous and forbidden taste. Definitely not a school night drink but delicious nonetheless. Just as we were getting ready to leave the bar brought over a Disappearing Dining Club Old Fashioned Float. A scoop of ice-cream swimming in bourbon. A sweet and smoky treat to end a fantastic evening.

I’ve eventually reconciled myself with the fact that I will never be early-seasons Don Draper. But at least for one night I got to drink like him.

We also managed to get ahold of the Woodford Reserve Brand Ambassador and ask him a few questions about bourbon, mixology, and the Old Fashioned. 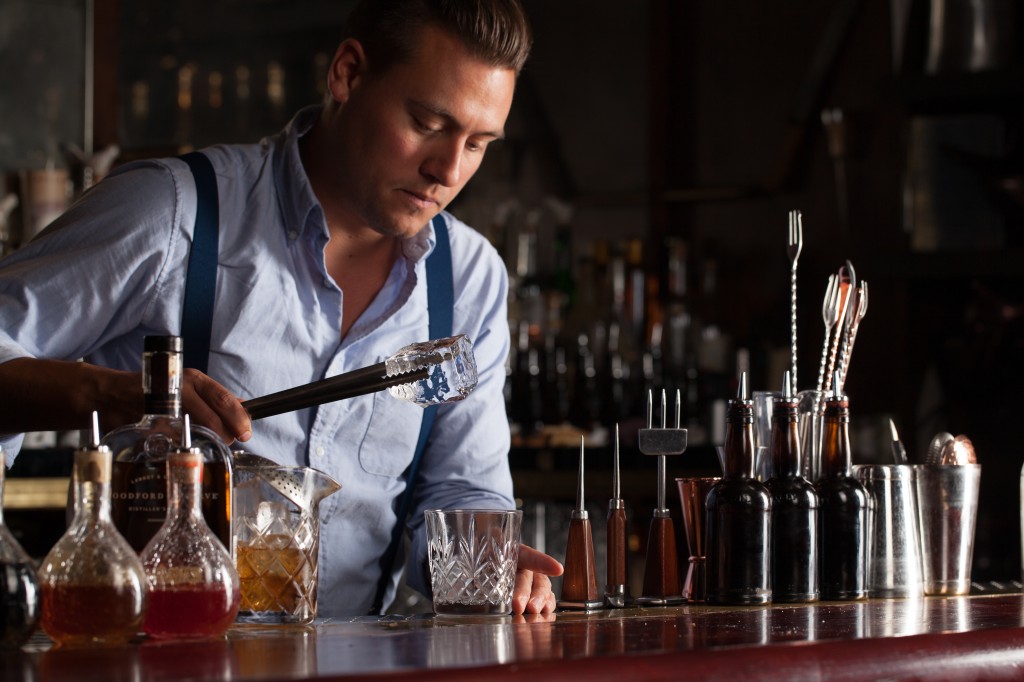 If you want to raise your whiskey/bourbon game but don’t want to spend a fortune or an inordinate amount of time on research, are there any simple tips you can give to raise your drinking/mixology game?

Knowledge of a spirit category takes time. However, their is a great deal of content online these days that is accessible to people that want to take more of an interest including some great books on production, history, prohibition etc. In terms of mixology, the classics are a solid foundation for making drinks. Take the old fashioned – sugar, bitters, bourbon and water, simple and balanced. These are simple to make at home and to reinterpret, for example you can switch out sugar for maple syrup or the original angostura bitters for grapefruit bitters. Good ice is always a must though!

Did the show ‘Mad Men’ with their endless consumption of whiskey and specifically Old Fashioned’s, lead to any kind of bump in sales or interest?

Very much so. Boardwalk Empire and Mad Men saw the popularity of bourbon rise hugely. As well as the fact that people were beginning to revive the category in the drinks trade. Bourbon and Rye can be used as the base for a huge number of classic drinks. Mad Men brought this to the consumer and viewers attention, making it cool again. It’s a category in serious growth at present. 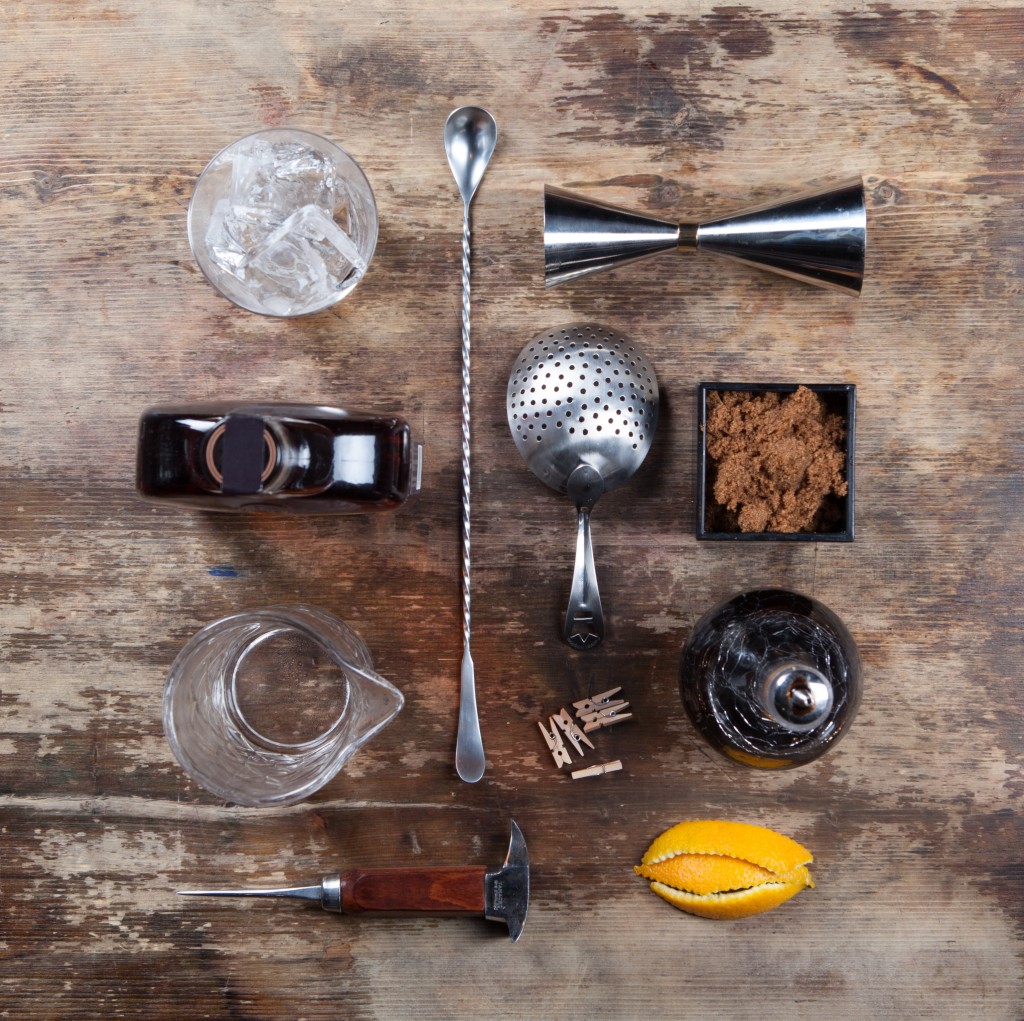 How does London compare to the other great cities of the world in terms of quality of drinks to be found?

Internationally, London is recognized as one of the best cities in the world in terms of drinks, bartenders and cocktails. In my opinion THE BEST! We have an incredible amount of world-class bars and world-class bartenders, each with their own different style and creativity. The scene is only going from strength to strength. 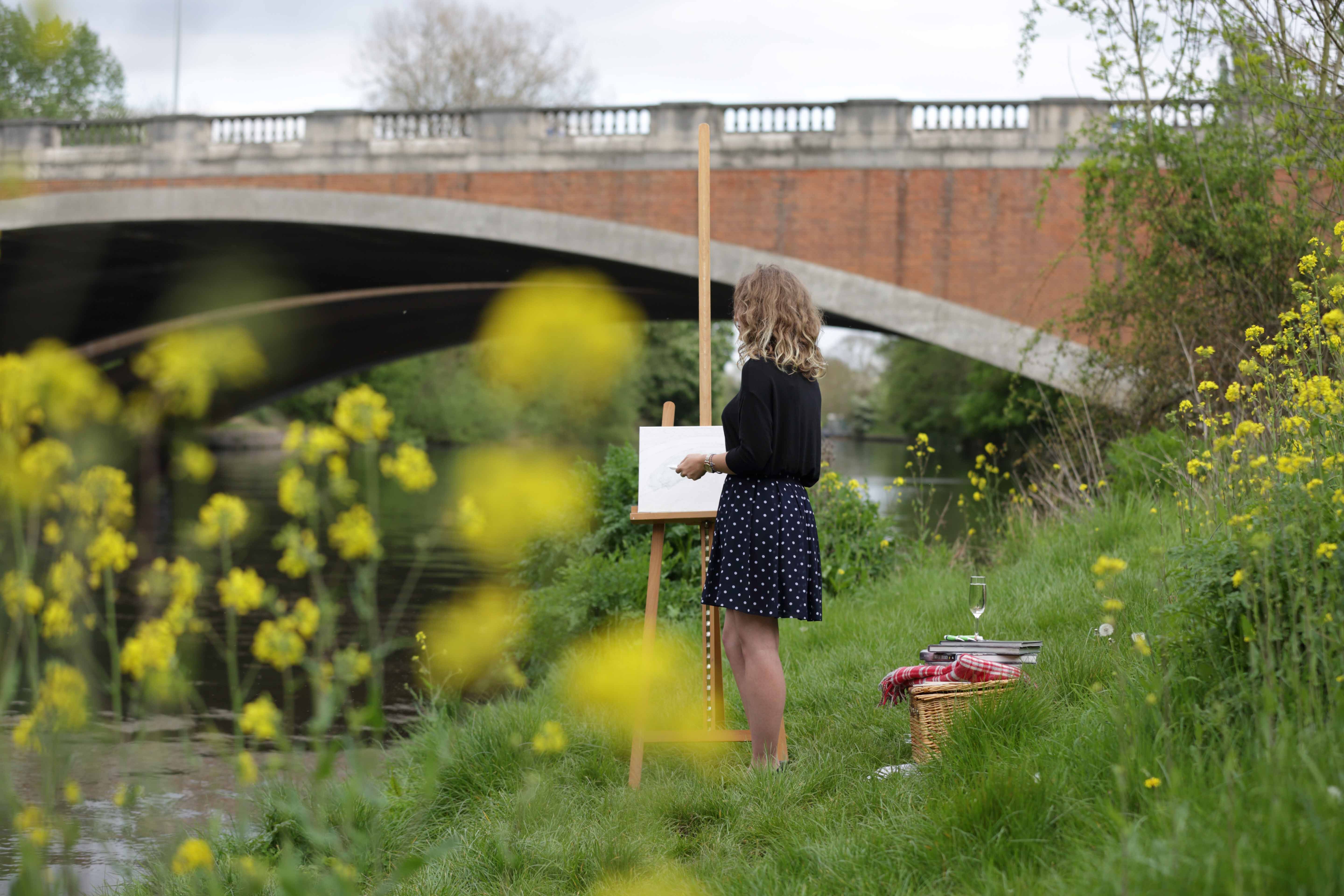 Pay what you want at Fika! 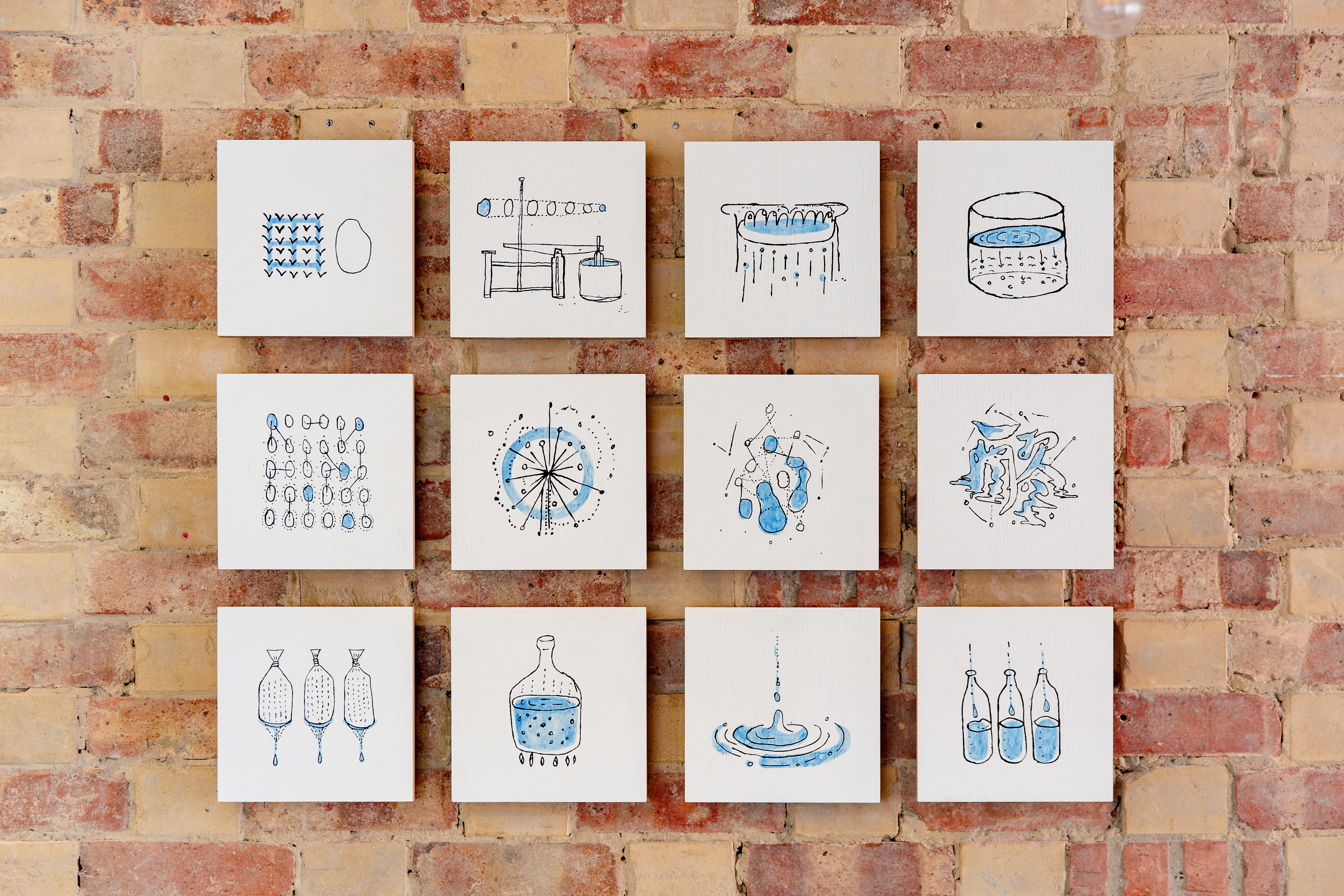