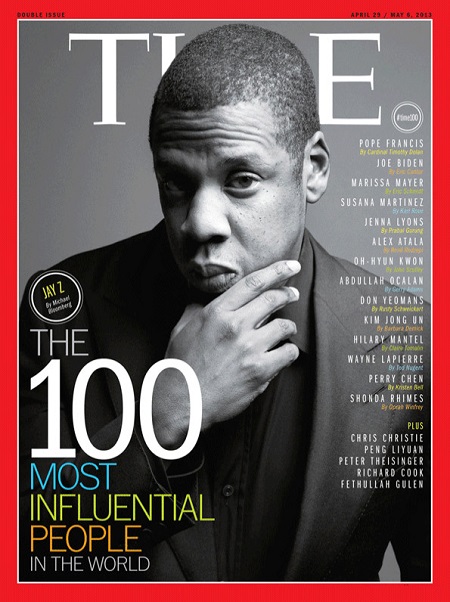 Father of 1-year-old Blue-Ivy, husband to phenomenal Beyonce, best pals with Kanye West; formerly and presently known as Jigga man. There is a million ways we could describe one of the most successful rap artists on the planet, but for now we’ll just call him Jay Z.

After winning a Grammy award a few months ago, alongside The Dream and Frank Ocean, Jay Z (real name Shawn Carter) must be prouder than ever to be crowned by Time magazine as one of the 100 most influential people in the world.

Mr Carter, born December 4, 1969, has sold over 50 million albums worldwide, as well as being a successful producer and entrepreneur. As well as being ranked as number 1 as one of the greatest rappers of all time, his hit album in 2001 The Blueprint, bagged him a place in Rolling Stone magazine’s 500 greatest albums of all time.

His clothing line Rocawear, created in 1999, grew and sold successfully as the New York-based line made over 700 million dollars a year! In 2011, Jay Z tweeted that Rocawear had partnered up with Pharrell William’s clothing line; Billionaire Boys Club. Catapulting his income and brand further.

Jay Z and Kanye West’s Watch The Throne tour, headlined in over 57 cities worldwide. I was lucky to be a part of their first performance in London, at the o2 arena, which sold out quicker than fire. They performed one of their hit songs from their album ‘N*ggas in Paris’ over four times and the crowd absolutely lost it.

Not only does the Roc Nation founder rubbed shoulders with many of the biggest names in music history, but he is a very versatile, skilled, and powerful man, that certainly owns his spot on the list of the most influential people on the planet!

We can list Jay Z’s achievements but should he be in the same list as world leaders? What do you think?