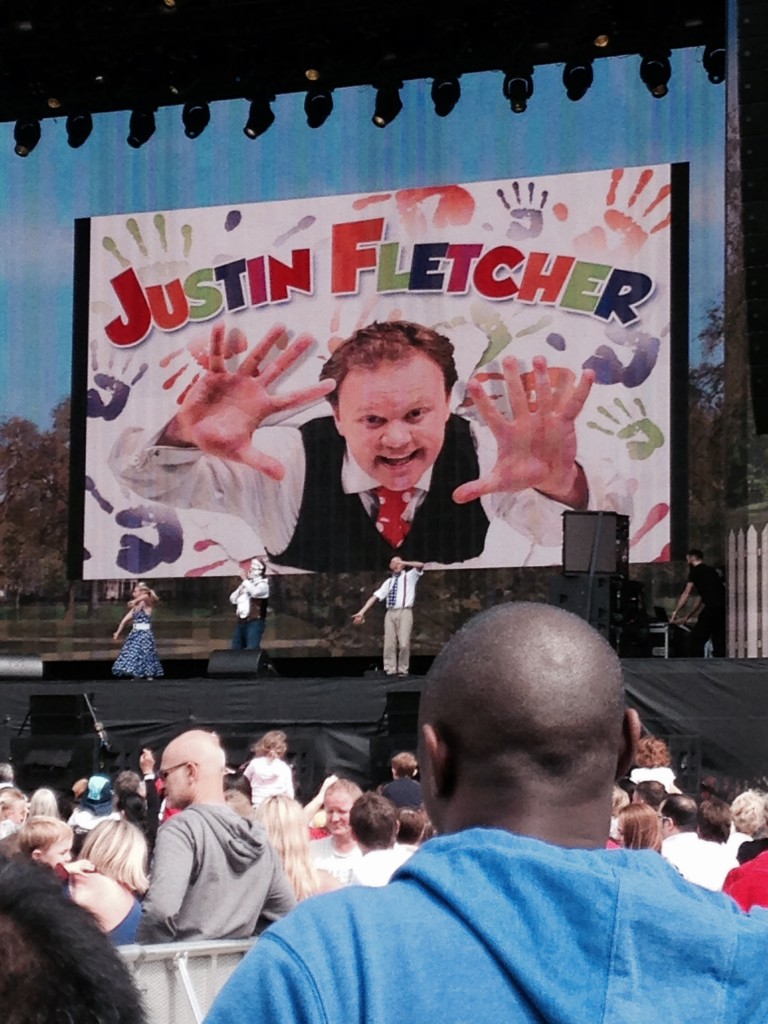 There’s something pretty special about London in the summer time.  With so much on offer we really are spoilt for choice and this summer has been better than ever thanks to the third year of the BST events.

Barclaycard’s British Summer Time events series has seen a plethora of incredible talent descend upon Hyde Park and my family were lucky enough to witness one of the world’s biggest stars in action.

I am not talking about Blur or Taylor Swift ladies and gentlemen, last weekend we were live and direct with the god of children’s’ television himself, Justin Fletcher aka….MR TUMBLE!

It may have been Glastonbury weekend but July 28th  also marked the day that London’s smallest residents were treated to their very own festival.  With headliners including Justin Fletcher, Dick and Dom, Union J, and Horrible Histories Live plus opportunities to meet with the likes of Pepper Pig and George, Daffy Duck and Spongebob himself, it was understandable that hysteria levels were at an all time high.

After a rigorous security check to make sure we did not have any food or drink hidden away, we finally entered the festival via the very pretty garden entrance.   The park itself was laid out in a similar set up to the other BST concerts meaning there were hundreds of different food and drinks stalls on the periphery whilst the main stage was situated towards the back of the park (fear not mums and dads, there were plenty of beer tents too!)  If you had one of Barclaycards VIP/Garden tickets you had the added bonus of lovely garden sofas and tables. This meant you could plot up and enjoy the view of the main stage screens in comfort (a massive win as far as we were concerned).

Unfortunately the sun gods were having a lie-in in the morning, meaning that we had to do a lot of our exploring in the rain, but thankfully a handful of child friendly fair ground rides and an Active Kids workshop meant that the little peoples fun was not dampened. 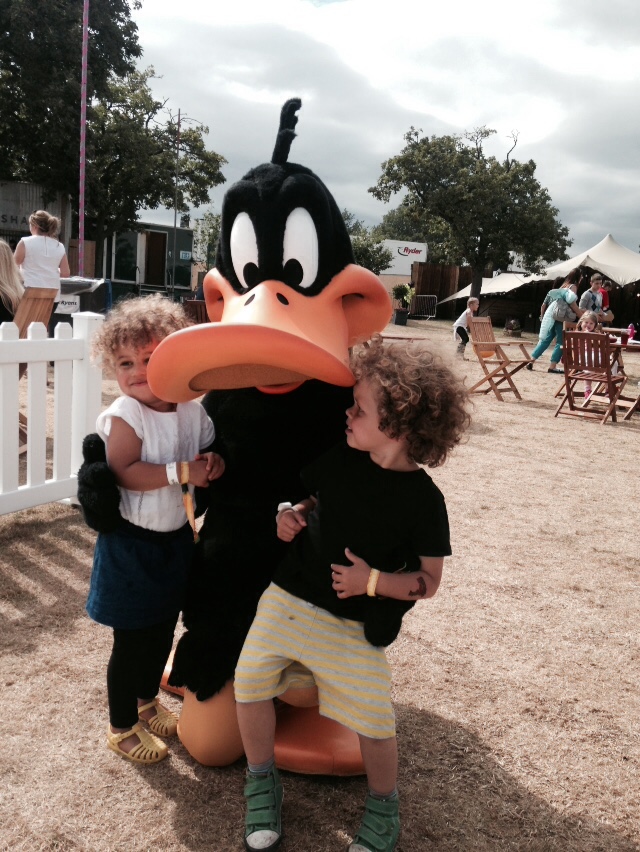 The first event to kick start the day helped get everyone in good spirits….a Frozen Sing along.  And not just any Frozen sing along, this was an attempt to break the Guinness world record for the most amount of people to ever sing a Frozen song in one place – and it was to be broadcast Live on Fun Kids Radio.   After a rousing rendition of Let It Go, lead by Les Miserables Carrie Fisher and sung with as much gusto as the National anthem during the opening ceremony at the Olympics, we blooming well did it! We are officially World Record holders – yay mini London! No matter what your feelings on Elsa and her army of shrill voiced devotees, there was no denying that this was a fantastic way to wake the crowd!

Having obviously been awoken by our fabulous voices, right on cue the sun came out just in time for the King of Kings, Justin Fletcher to take to the stage. After 45 minutes of high-energy sing- along’s and Makaton signing (and believe me, if you were part of the audience, no matter what age – you were doing the actions!) we were all left in awe of his energy and enthusiasm!  There is a reason he is top of his game, Justin knows exactly what the kids want and he really did deliver a killer performance.  I don’t think I have ever seen my three year old as delighted as he was when Justin threw custard pies into his own face.  To be honest, that alone was worth the ticket price for me.

Between sets the CBBC favorites Dick and Dom kept everyone entertained with lots of silly songs and audience participation.  Then for the slightly older kids came acts including Horrible Histories Live – which was actually very amusing, and of course heartthrobs Union J.

After hours of leaping around with a three year old on my shoulders, a sit down in the sun with a jug of Pimms was exactly what the doctor ordered. Delicious cups of homemade ice cream courtesy of Nina St Tropez, whilst watching the second Justin Fletcher show of the day on the big screens kept the clearly exhausted little ones very happy.

Overall the BST festival was brilliant.  It gave my children a fantastic opportunity to see their favorite TV stars up close and enjoy an authentic festival experience for themselves. Most importantly it felt friendly and safe enough for us as parents to be able to enjoy it too – something that has kept me away from other mainstream festivals.  There are plenty of loos (which are spotless by festival standards) and baby changing facilities and water is available at various stations around the park. Children are given wristbands with your phone number on in case they get lost and stewards are on hand to help almost everywhere you look.

My only criticism of the day would be the price of food and drink.  I only found one stall that was serving child sized/priced Mac and Cheese portions and with such strict rules on taking food and drink into the festival, my pocket took a pasting come lunchtime.   Saying that, if you go to festivals these days you kind of expect that you will have to pay extortionate amounts for food and drink so as I was aware of this in advance, it would not put me off taking my kids again as this really was a fabulous day out.

My advice to parents would be buy tickets in advance, check the weather forecast on the day, pack only the essentials you will actually need including a raincoat into a comfortable rucksack, wear flat shoes and make sure your family have a massive lunch before you enter!

For more information on 2016 event: