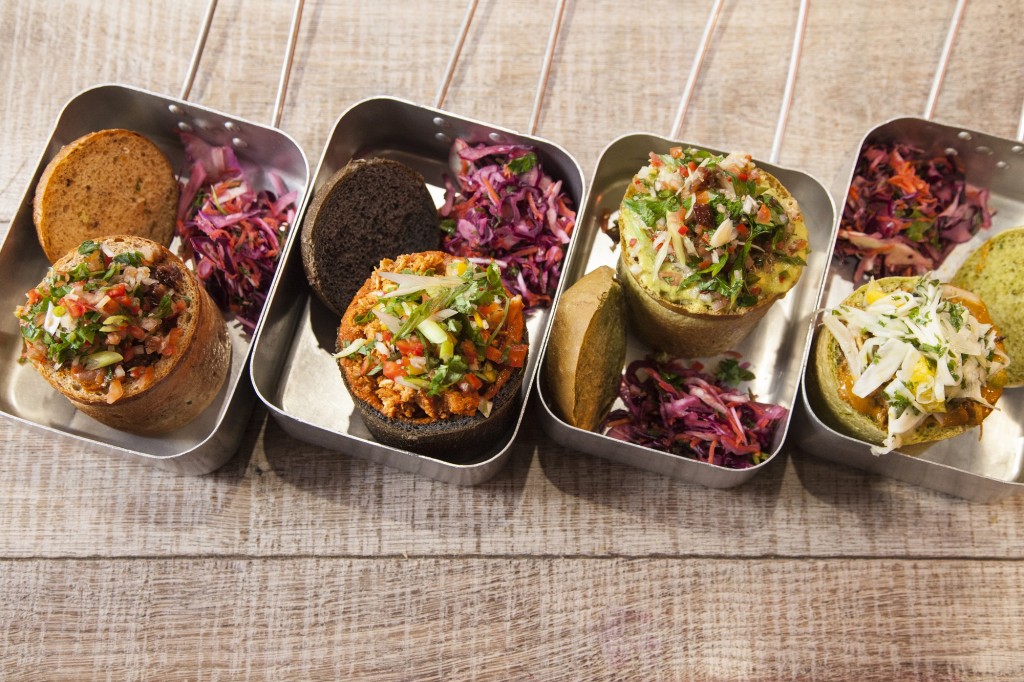 If you google traditional ‘Bunnychow’ the images that generally pop up are huge chunky squares of half loaves with curried fillings spewing out onto the plate. If the gluttonous expectation of huge portions of meat and bread is spurning you to pay a visit to Bunnychow in Soho; you will be disappointed…..but don’t despair as your disappointment will end there!

The company has taken a different stance in the preparation and serving of this traditional fare. Their fusion of old meets new comprises of a variety of small freshly made Artisan breads including a gluten free option. The breads which cleverly incorporate ingredients that provide added nutritional and proposed health benefits such as Matcha Green Tea and Charcoal Powder are paired with their variation on a choice of 4 South African and globally inspired fillings.

While waiting for my order I had a chance to take in the décor. The restaurant in the heart of Soho is small but has a nice atmosphere with its long wooden tables and mix of padded bar stools and padded benches, it was surprisingly comfortable. Visually there is a lot to take in, the walls are adorned with blown up colourful menus and instructions on how to eat the bunny chow, alongside quirky South African phrases. For a fast food restaurant, I felt quite relaxed from the moment I was seated.

My order of Chakalaka Chicken served in a Charcoal Brioche was served in a small metal ‘camping style’ mess tins.  I know there is a trend for bars and restaurants to serve food in all kinds of quirky contraptions, and I have my gripes about being served my food in anything other than a plate. However once I took a mouthful of the chicken filling……all was forgiven.

Their motto is very apt and speaks for itself ‘little loaves crammed with big flavours’. My filling was very spicy and full of flavour, what you’d expect from food with African origins. It might be a little too spicy for the uninitiated palate, however the accompanying homemade chunky slaw (we were recommended the Fennel slaw), works like a cucumber riata and adds a cooling balance to the dish.

My companion opted for the bread free ‘naked bunny’ option which is any filling (Chakalaka in her case) served on a mix of quinoa, beetroot, spinach, peas, black beans, spring & pickled onions. We had a helping of chicken wings to share as a side which consisted of 4 small wings marinated in molasses, pimento, garlic and chilli sauce. It was appetising but the only complaint from my dining companion was that she found her Chakalaka got cold very quickly given that it too was served directly in the cold mess dish and served with the cold salad /quinoa. 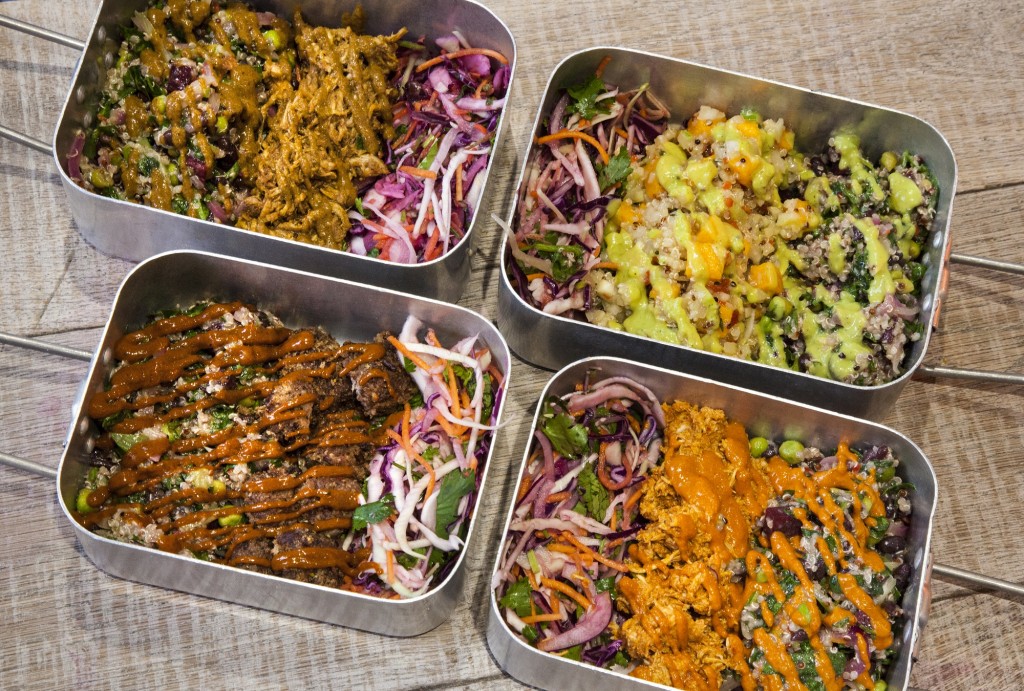 There are additional homemade sauces that customers can help themselves too, the strangely named ‘Monkey Gland’ Sweet pimento BBQ sauce and a spicy hot chilli sauce. Apparently 3 years of blood sweat and tears have gone into perfecting the ‘monkey gland’ sauce, so we had to give that a try. We were forewarned that the chilli sauce is very spicy and to go sparingly, so we tried a small dollop on the side. Both were very nice and the Chilli Sauce was indeed spicy but not so overbearing…but in saying that don’t go squirting it all over you bunny like ketchup sauce, you have been warned.

If you do get a little heavy handed with the sauces, they have 4 varieties of nutritional freshly made juices on hand to alongside beers and soft drinks to douse your taste buds and quench your thirst. We tried a Cucumber Mojito which was refreshing. We also sampled a very delicious spicy ginger/chilli concoction which had a nice warming kick, this can be served warm like hot apple cider. In addition we tried a shot of the North Beach made with a blend of coconut water, cream elderflower, lime and lemon juice. This batch was a bit heavy handed on the lime juice, but my takeaway bottle had a good balance of flavours. All their mocktails are made so that they can easily be converted to alcoholic cocktails with a dash of spirits (available for an extra £2.00) . I.e. add a dash of rum in the North Beach and you have a nice take on a Pina Colada.

We finished off with a delicious and decadent brioche bunny chow, filled with melted chocolate and topped with a crumb mixture made with the filling of the green matcha bread. For someone who is not a lover of desserts, my dining companion ate the lot.

Working with a supplier in Ireland, they are branching out with their own branded small tablets of chocolate. As with their ‘chows’; the packaging is a distinct vintage style label incorporating the company logo.  I took away a sample of their Earl Grey chocolate; with its distinct smell of Earl Grey tea and texture derived from the blended leaves in the ingredient,  it’s an and acquired taste and anyone that has a penchant for Earl Grey tea  would love this. Unfortunately I’m neither a lover of Earl Grey nor milk chocolate, however if they introduced a dark chocolate version I would definitely be tempted.  Salted Caramel chocolate will soon be add to their confectionery range.

Speaking to the amiable proprietor Rishal, he is knowledgeable about flavours and not averse to experimenting with ingredients (experience honed at the 3 Michelin Starred Dorchester restaurant), his passion in the food and business is obvious. Three years in building the business from food truck, pop up shop, to store front; they are through experience, trial and error and customer focus group feedback; constantly make improvements to their recipes taking into consideration things like reducing the bread size, bread to filling ratio and incorporating more South African inspired fillings. The reviews/feedback on social media sites are a testimony to how well they are developing. Unlike their ‘bunny chows’ they have no intention of staying small, and have plans to expand. Follow them on social media for updates.

It’s extremely affordable (£6 for a bunny chow, £3 for sides and dessert, drinks £3-5, eat in or take out).  The design and quality of their take out box is surprising given that there is no added surcharge, and the design concept (based on a Jewellery gift box) is interesting. The prices are not reflective of the quality of the food, its a definite go to for affordable nutritional fast food and a great place to hang out anytime of the day. I’ll be going back for the breakfast vegetarian Bunny Chow.

Why not grab a bunny and try for yourself? 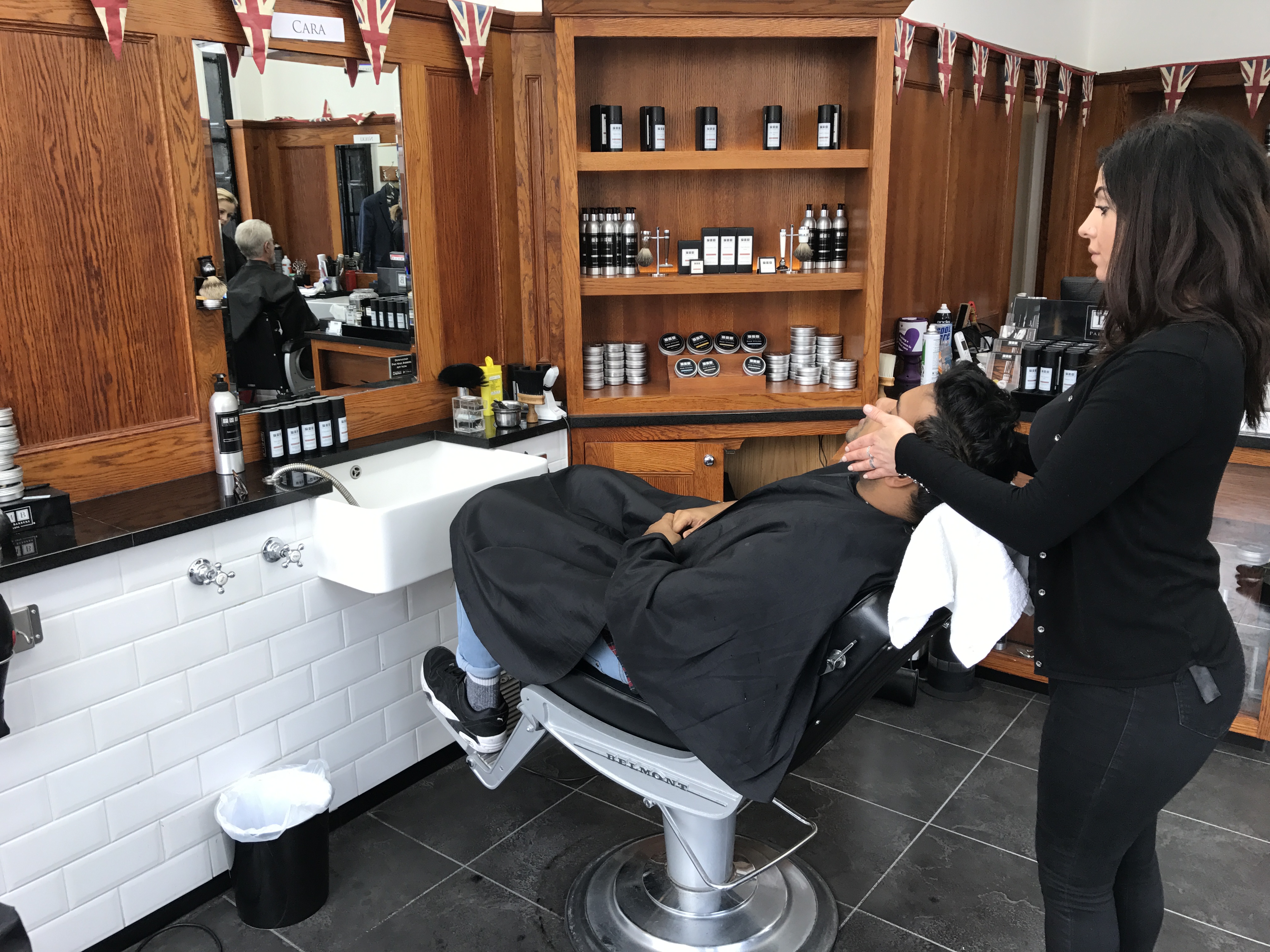 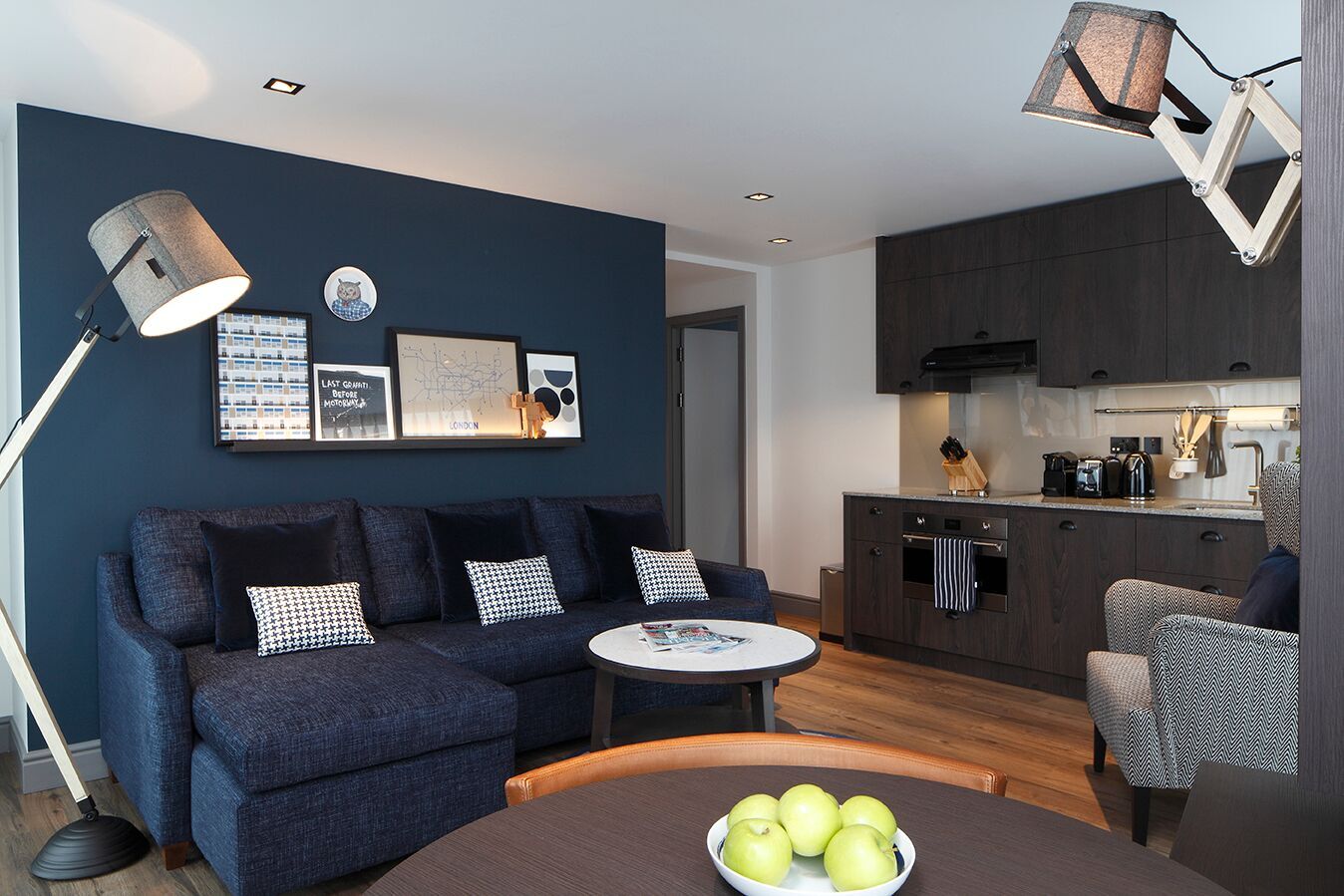