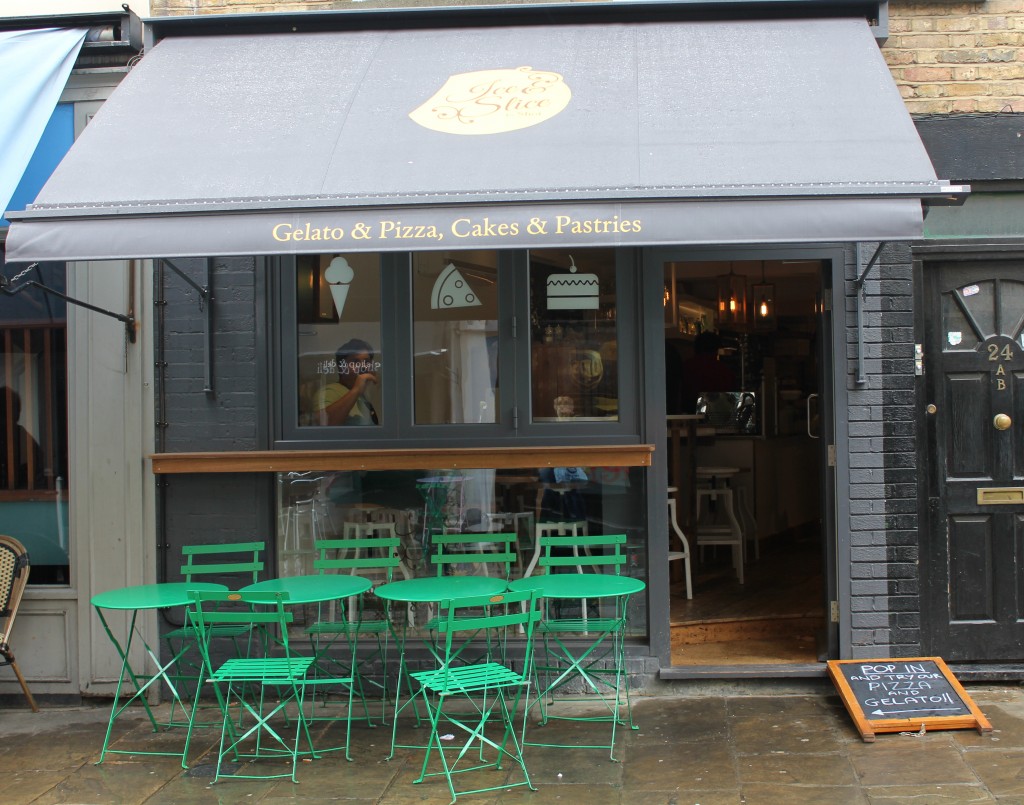 Ice and Slice is an Italian café come gelateria, situated a stone’s throw away from Fulham Broadway’s tube station. Conveniently located for both locals and visitors, the café is the offshoot of the successful independent coffee house Shot Espresso – conveniently housed within sight, just across the pedestrianized road. Both establishments seek to offer a traditional Italian eating and drinking experience – with Shot Espresso supplying the coffee and pastries, whilst Ice and Slice serves up authentic Italian pizza and ice cream 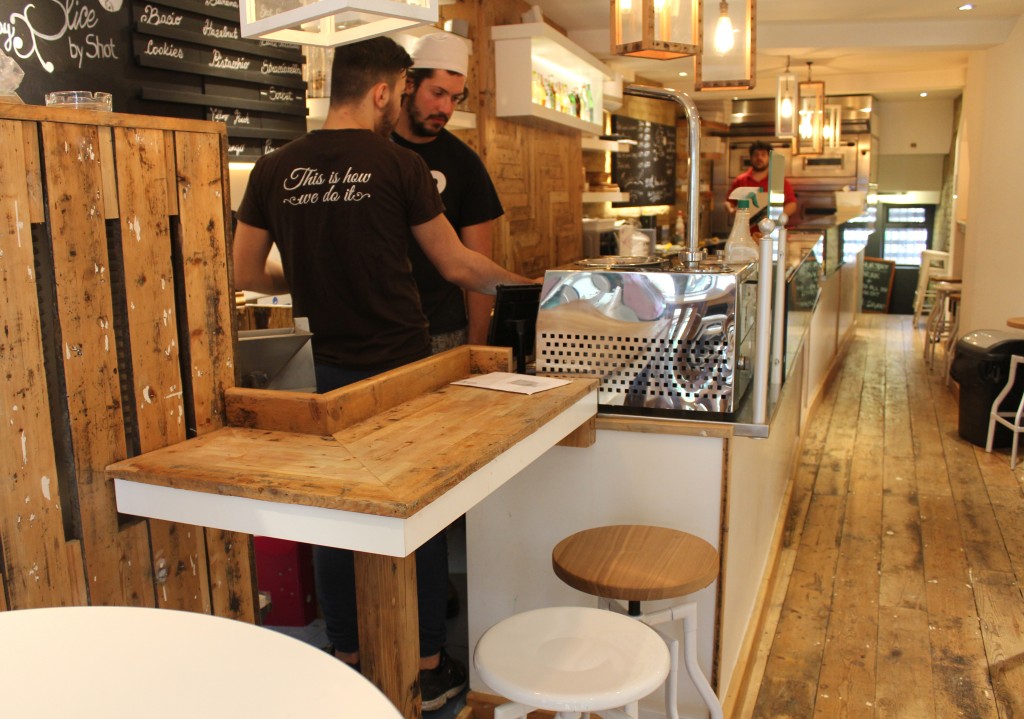 I visited Ice and Slice on an incredibly grey and rainy afternoon that left me unable to take advantage of their outdoor seating. However, the newly refurbished interior has more café style seating, comprised of individual tables as well as bars along the window and main interior wall. Although it isn’t a large space – seating approximately fifteen inside at a time – the bustle of busier afternoons would lend it a pleasant, cosmopolitan atmosphere. At quieter times, like when I visited, you have the opportunity sit and chat with the friendly and informative staff – all Italian themselves. 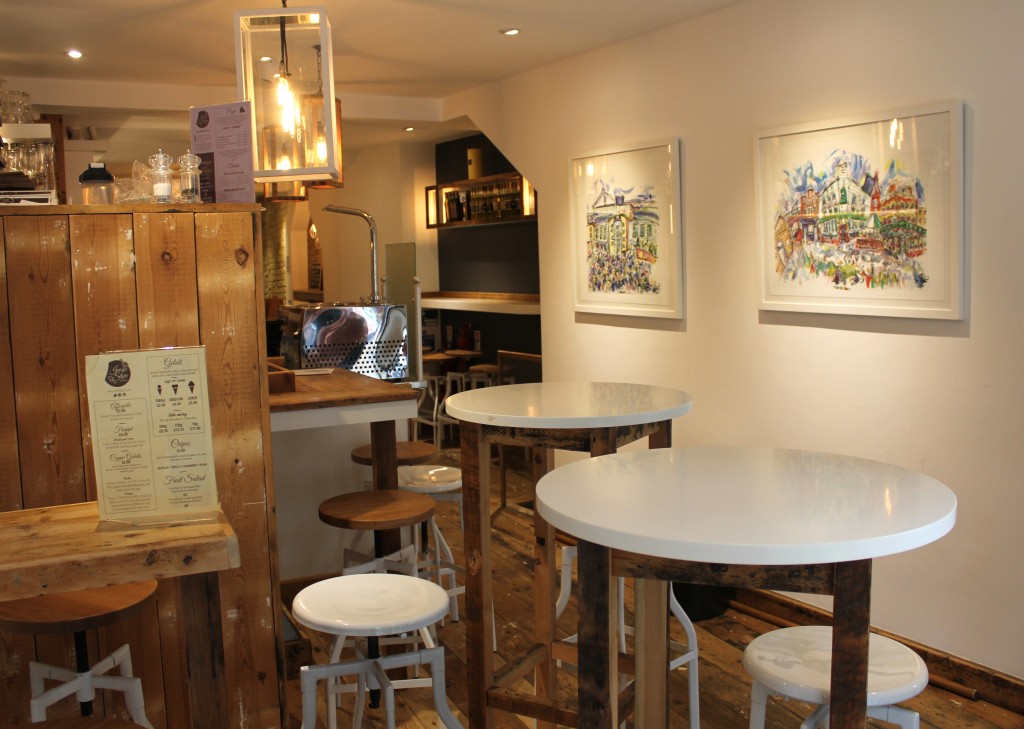 Although there are only two real dining options at Ice and Slice – pizza and ice cream – there’s still a plethora of choice. When I visited there were eight different pizzas to choose between, and an even greater number of ice cream flavours. Pizzas are available by the slice – costing between £3.50-£4.90 – and are made entirely from imported Italian ingredients, giving them an incredibly authentic taste. I sampled three different options; the Nduja, the Bufalina and the Ricca (a stuffed pizza). 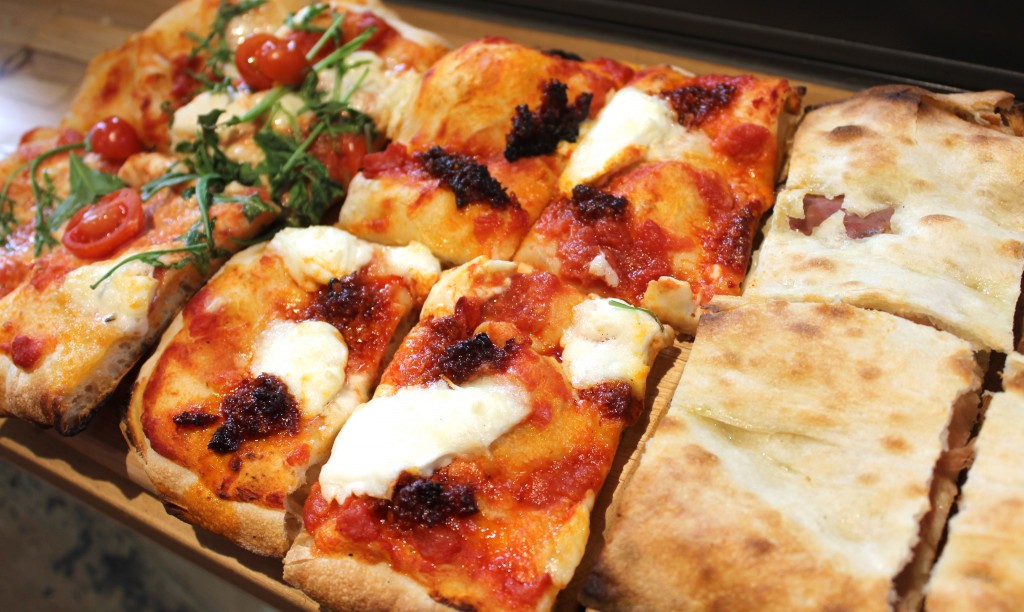 The Ndjua was my personal favourite as it balanced a fine line of spice that was noticeable whilst still allowing the flavor of the rest of the ingredients to grace your palette. In contrast, I found the Bufalina tasty but uninspiring – and I probably wouldn’t choose it again. These two pizzas both enjoyed the same thick, airy base that was filling without being stodgy. The final pizza I sampled was the Ricca – a stuffed pizza full of aged parma ham, buffalo mozzarella and cherry tomatoes. It was absolutely delicious but it was much richer than the other two. It’s also worth noting that because it was stuffed the dough had a slightly thinner consistency which has its own appeal. If I was visiting alone I’d recommend opting for just one slice of pizza, as it’s definitely sufficient. However, if you’re visiting with friends I’d recommend mixing and matching pizza slices. Although you purchase the pizza slice by slice, once they’re reheated they’re each conveniently cut into quarters before being served, making them perfect for sharing. 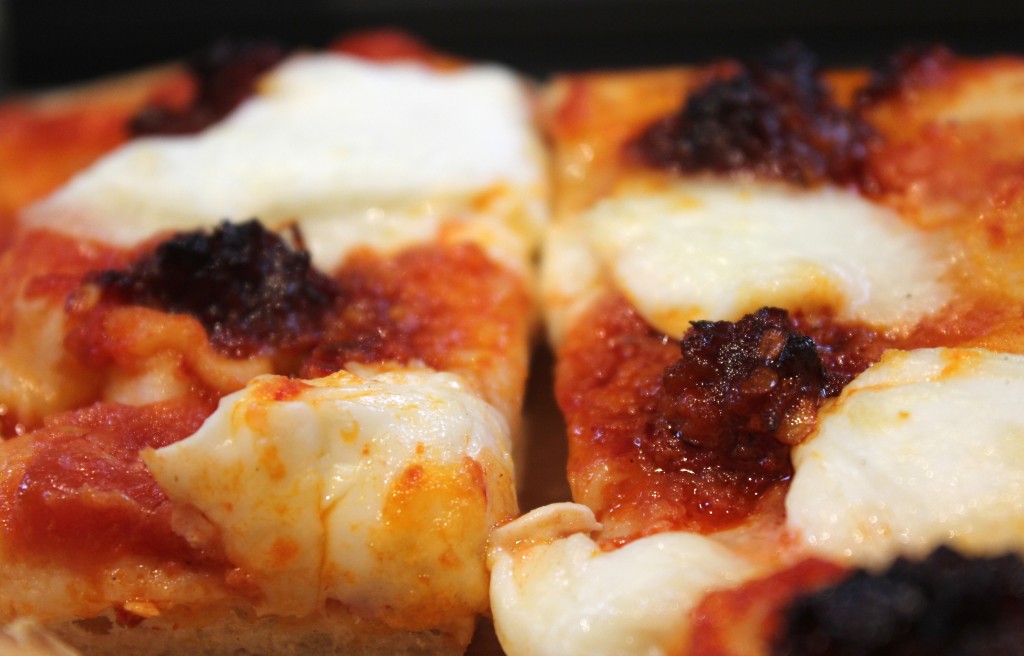 If you’re more interested in Ice and Slice’s ice cream then you can purchase it by the cupful (£3.00-£5.00) to eat in the store, or you can purchase larger portions to take home and enjoy. All of the ice cream flavours share the same thick and creamy consistency, and the shop’s most popular flavor of ice cream is Pistachio. I can certainly see why, it’s hard to get pistachio right and Ice and Slice have hit the nail on the head, producing a very tasty and authentic pistachio flavour. My other personal favourite was Cookie as it had a very mild and sweet taste compared to some of the bolder flavours, such as Expresso and Dark Chocolate. 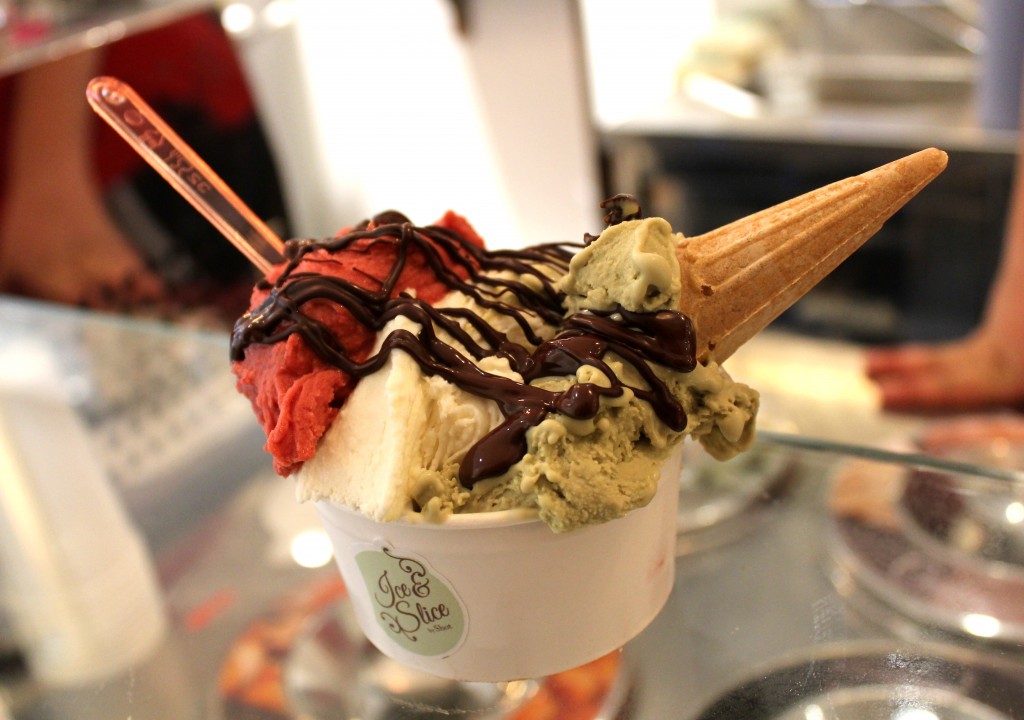 If you’re looking for something milk-free – or if you’re just a fan of it in it’s own right – then Ice and Slice also offer absolutely delicious sorbets. Their sorbets enjoys a rich and creamy consistency and are available in a considerable range of flavours. My personal favourites were Mixed Berries, which lacked the often bitter aftertaste of traditional berry sorbets, and Coconut, which captured an authentic coconut flavour without being overpowering.

Overall, I think that Ice and Slice has a lot to offer. Not only is the food incredibly high quality whilst still being affordable, but the venue itself is modern and stylish. Ice and Slice gets busier over the weekend, but it’s particularly worth a visit on Thursday nights when there’s an “all you can eat” pizza offer priced at £10. I can definitely see Ice and Slice spinning itself into a successful chain, but until then I’d still say that it’s worth heading down to Fulham – friends in tow – to dig into some of their delicious pizza, Italian style. 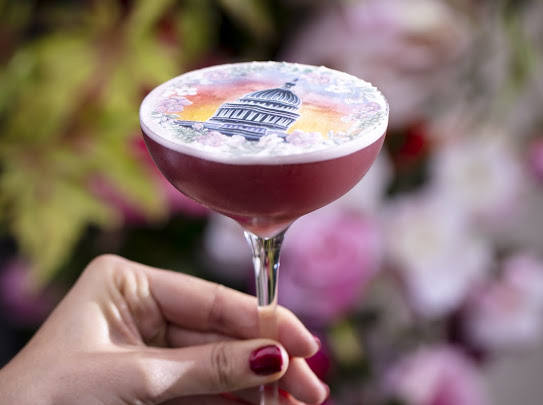 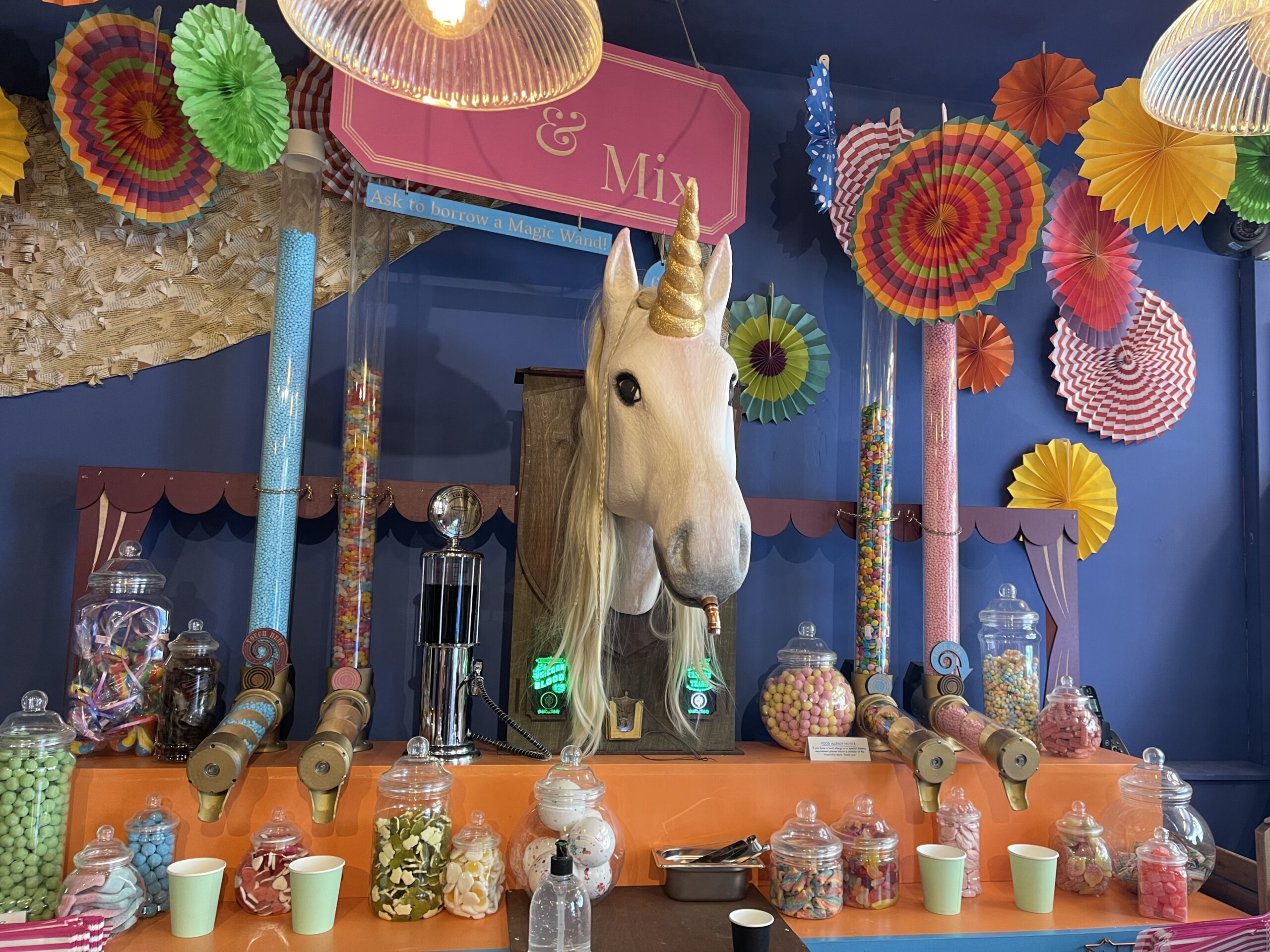 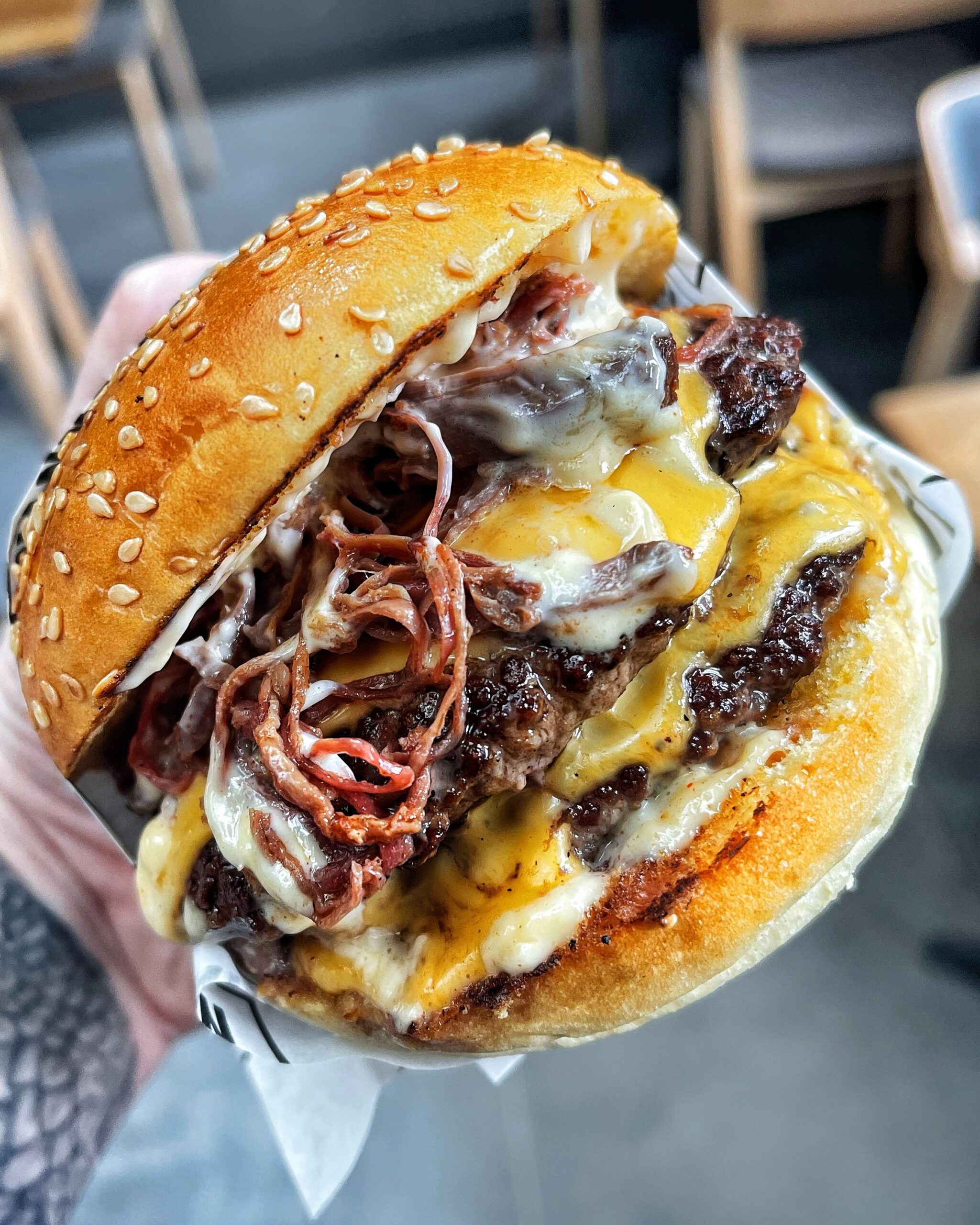