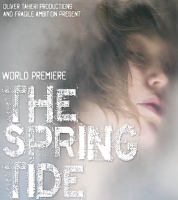 At The Old Red Lion Theatre

Plays seem to come along in pairs. For me this week The Spring Tide followed Trafalgar Studio’s The Pride; both plays focused around a homosexual relationship and both of which confront the difficult choices inherent in such relationships.

The stage is lit up by young Lan (Nellie McQuinn), lighthearted and rebellious, unconstrained by social mores and unafraid to live life. Her witty lines are played out energetically by McQuinn. I found it difficult to believe that the mature Lan (Anita Parry) was the same girl, and not simply because she had “lost the leprechaun”.

Susie’s transformation was more believable: the careful and diligent teenager (Lorena Vila) morphing credibly into the anxious wife and mother (Melanie Ramsey).  One could see why, heartbreakingly, she had opted for the safe, sensible life of motherhood and conventionality.  Less convincing was her choice of husband, the aggressive “Spud”, after having left her small-town home and educated herself to doctor-hood.

The small upper room of The Old Red Lion Theatre and the simple, darkly-lit set lent a claustrophobic atmosphere, going hand in hand with the stifling home-life inhabited by Susie. Lan’s vivid and vivacious appearance brought a brighter ray of hope in comparison, leaving Susie with the bitter choice between her carefully constructed and secure family life and a promise of the happiness that a real connection can bring.