ONIN London > Blog > 10 ways to enjoy Christmas like a Londoner

If your heading to London in the next 6 weeks , here’s a round up of a few things, us Londoners like to get up to over the festive period. So ditch the tourist trail, and come and experience Christmas like a local. 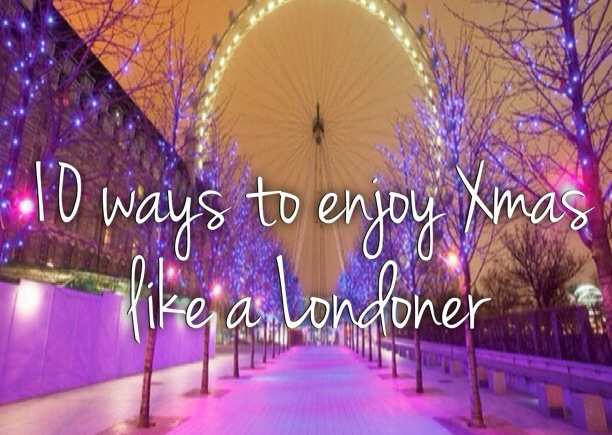 London’s christmas lights are some of the best in the world. A good way to see all the lights close up, is from the top deck of a London bus , so nab a seat in the front row and take in the sights. The best bus routes are

2. Spend an afternoon at Winter Wonderland

Kids will be spoilt for choice at Hyde Park’s annual Winter Wonderland, which includes a giant observation wheel, Zippo’s Christmas Circus and the capital’s biggest ice rink. As well a Santa Land, with rides, games and food stalls. Where kids can meet Father Christmas then jump on board the Santa Express. Entrance is free, but you’ll need to buy tokens for the rides. 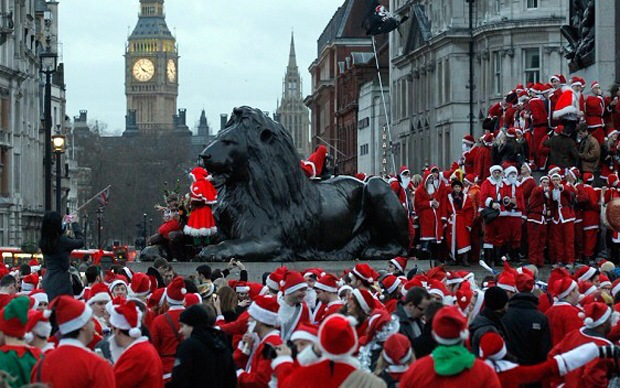 SantaCon is on the 6th December, it  involves a gang of Santas running around London, singing carols, giving out gifts, and encouraging strangers to sit on their laps. Why ? Well just like the realSanta, they want to celebrate Christmas and spread some festive cheer. Anyone can take part as long as they follow the 3 rules for participating All Santas must  a) be jolly b) wear a Santa suit, and c) don’t get arrested. The meeting point and route is top secret and won’t be announced until. 24 hours in advance, so keep an eye on the website http://www.santacon.co.uk/ and make that appointment at the fancy dress shop now.

4.Check out the Christmas Tree in Trafalgar Square

The Trafalgar Square Christmas tree, is a donated by the city of Oslo each year since 1947, In gratitude  for our support during the second world war. The tree is on display in Trafalgar Square from the beginning of December until 6 January.

Nothing feels like Christmas more than skating in open air, at an iconic London location. Choose from Hampton Court Palace, Somerset House or The National History Museum. Its also compulsory to have a post skate hot chocolate.

6.Exercise those vocal chords at a traditional carol service

From the end of November , carol services start popping up all over London. Check local listings magazines such as Time Out for that weeks services . Most are in aid of a specific charity , so are free to enter but donations are expected. All Hallows Church by the Tower , is one of London’s oldest church’s , they have various christmas services but for Carols by Candlelight head down on 18th December at 6pm

Taking the kids to the pantomime is as much a part of Christmas as decorating the tree and giving presents. Pantomime dames ,heroes and villains ,its a british institution For a Panto near you check out http://www.bigpantoguide.co.uk

8. Grab a meaty bargain for Christmas dinner at the Christmas Eve Meat Auction.

London butchers Harts of Smithfield, have held their annual Christmas Eve meat auction for the last 30 years, everything’s  got to go , so get a wad of cash, a sturdy bag and be prepared for a load of yelling to secure that bargain turkey. It starts promptly10am, but for a prime spot in the auctioneers eyeline get there early.

All faiths are welcome to midnight mass at Westminster Abbey , the service starts at 11.30pm. Its a free service but you do have to book via http://www.westminster-abbey.org/

10. For the ultimate Christmas Day

Christmas isn’t just about the presents, for the true meaning of Christmas head to St Paul’s Cathedral for their Christmas Day service. For the early birds there’s a service at 8 am, or if you fancy a lie in head on down for the 3.15 pm service. But there’s no public transport, so you’ll have to beg,borrow or steal a lift to get there

Brought to you by Natasha @ishootandtravel