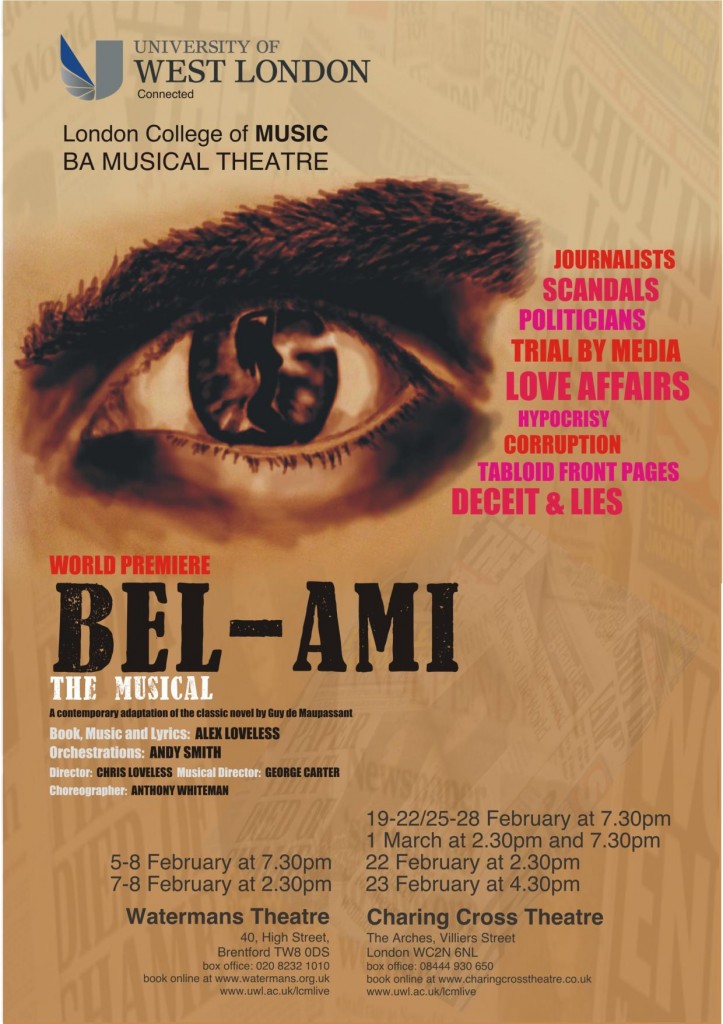 The film tells the story of a former soldier, George Dury, who ruthlessly works his way up the ranks of a friend’s newspaper. Corruption, manipulation, sleaze and ruthless greed are all here in abundance. These themes seem very current in the wake of the phone hacking scandal, and the constant link between awful media empires like Murdoch’s and sycophantic politicians like Mr Blair. Oh Tony, once so full of idealistic vigour. How far you’ve fallen by offering “unofficial guidance” to help Rebekah Brooks cover up her actions.

Bel-Ami is the gossip column that George soon takes charge of. Johnny Fitzharris plays the charismatic lead and holds the sometimes disparate plot together with strong vocals and a distinct stage presence. He has an animal lust for women, particularly women married to men in power. He falls for the wife of the newspaper owner and callously celebrates her husband’s death. A nice touch is that the funeral scene seamlessly merges into their shot-gun wedding. This offers an insight into the callous attitudes and motivations behind marriage within this world.

One slight issue was that George seemed to react to the situations rather than instigating the action. I wanted more Machiavelli Richard III type behaviour, as he played everyone against each other to wreak havoc. He was reminiscent of Bruce Robertson, Irvine Welsh’s corrupt Detective in Filth. A man who will stop at nothing to achieve power and respect and delights in the trail of destruction he leaves. This film is an interesting portrayal of how greed and lust for power can totally consume an individual. I’m sure Rebekah Brooks and Rupert Murdoch think that he’s a role model to aspire towards.

The film is interspersed with a range of musical styles including dance, rock and RnB. The dance routines are well-choreographed by Anthony Whiteman and the recurring songs are catchy and rousing. The cast perform the songs, dances and dialogue excellently and it seems detrimental even to mention they are final year students. A shining light throughout this slick production is Alison Poulton, who plays Madeleine, the wife of the deceased newspaper owner, who is every bit as manipulative as George and equally besotted by power. Strong support comes from two of Georges other conquests. Tessa Leake was particularly amusing and Katherine Kitchener, represented a rare innocence in this world and shone vocally.

This is a contemporary take on power, greed and the media’s relentless appetite for carnage at any cost. I’d definitely get down to Charing Cross Theatre to watch the first play from this University to be staged on the West End. Tickets cost £10 and are well worth it for this interesting, lively and very well acted musical.

The upcoming showings are on the following dates:

Tickets and more information can be found at Charing Cross Theatre’s Website.

How to Hide being sacked from previous jobs