Les Enfants Terribles have decided the time has come for Alice adventures in Wonderland to take an underground turn. Let me introduce you my friends to a much darker story hidden inside Waterloos Vaults.

After a creepy walk through the Waterloo underpass you are presented with Alice’s lair. Her waiting area was nothing like your run of the mill ‘waiting for a doctors appointment’ bland room, it was a cinema where instead of a stage there lay a cocktail bar. Some of her chums were dispensing sweets, cocktail tokens and Pieminister pies. After sipping on a couple of raspberry gin concoctions we were called to order and lined up ready to enter Wonderland.

If you want to stay oblivious to goings on in Underground Wonderland then read no further!

“If everybody minded their own business, the world would go around a great deal faster than it does……” 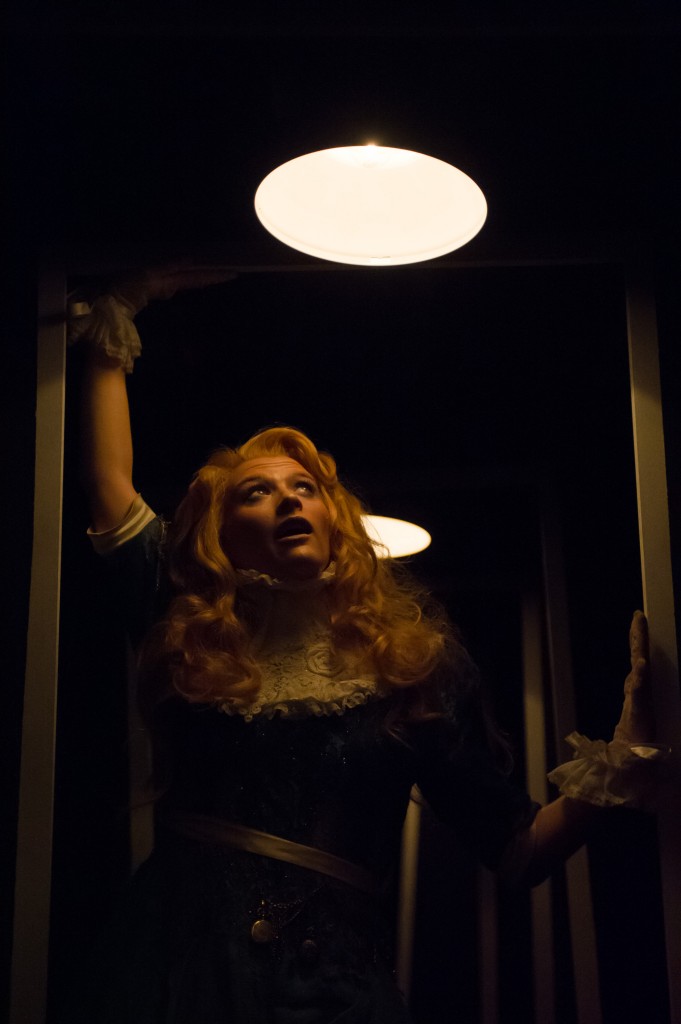 Upon entering wonderland you are greeted by the White Rabbit in all his hairy glory. He and his playing card chums gave each of us a choice. Food or drink? Your decision determined your evenings endeavours. Well after one cocktail another drink sounded like a rather tip top idea! So a mini bottle of lemonade (darn there were children) and a left turn later we found ourselves hunkering down, now with a playing card clutched in our hands, trying to break into Wonderland. No more names, from then on I was only the ‘Eight of Spades’.

After infiltrating the perimeter it was time to meet the the Cheshire Cat and his ummm body? It was deliriously awesome. One chap controlled the cats head and two girls manipulated the cats detachable body, a cool bit of puppeteering. It was then our suits divided us, so I said goodbye to my chum (who was a club) and was lead off with my new Spade friends by another playing card.

First stop? A room full of mirrors where Alice was stuck behind one, and errrr didn’t know she was Alice… 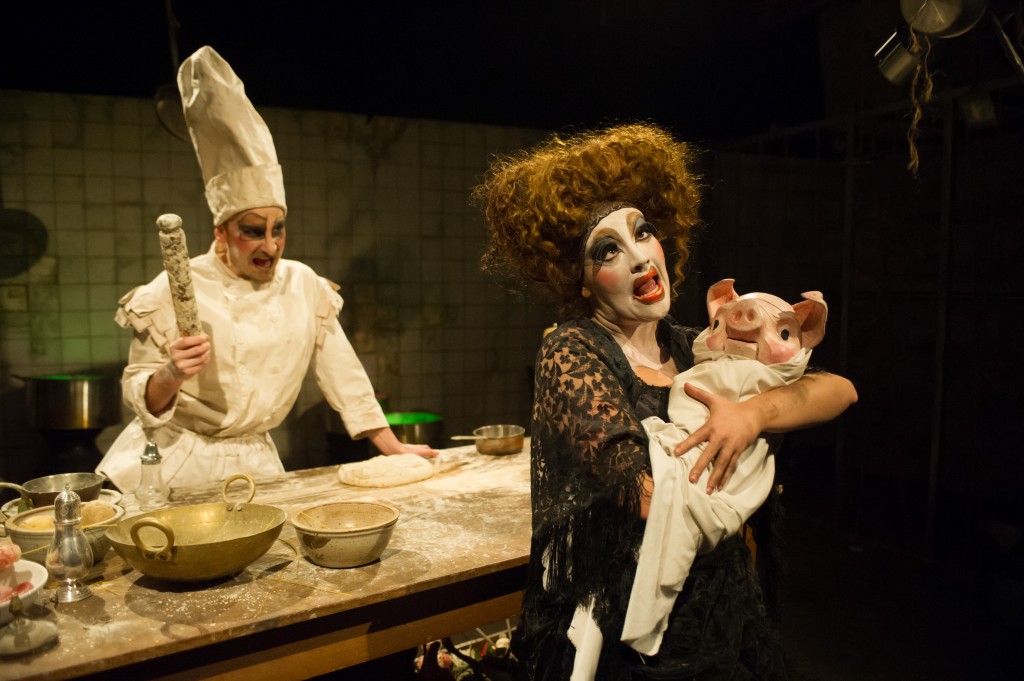 From then on our experience comprise of numerous beautifully constructed rooms each more psychedelic than the last. We were taken to the kitchen to meet the stressed cooked and his nutty wife (who just happened to be nurturing a pig, which she promptly popped in the oven……). Then we popped in to see the aerial acrobatic twins jumping on each other’s bed. Next was Absolem the caterpillar, who seemed awwwwwfully tired. I believe he gave us words of wisdom while smoking his groovy pipe, however by that point I was in such a warm haze I had no real idea what was going on! 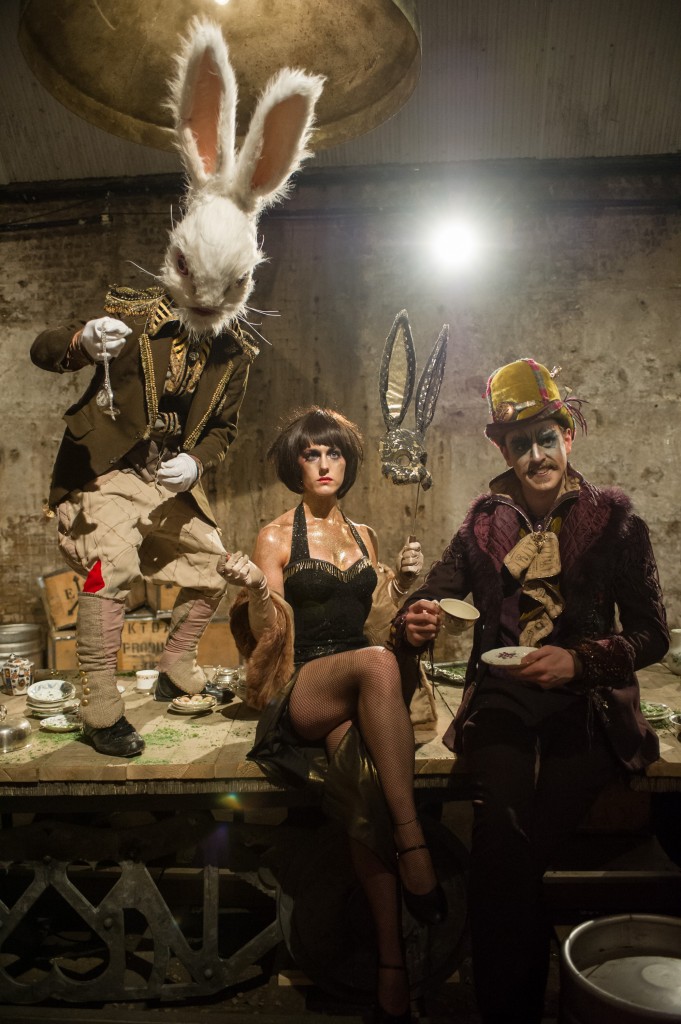 We had pit stop next where we met all our old chums and went for a cheeky cocktail at the Mad Hatters tea party where everyone was rather……mad.

The last port of call was a courtroom where all the card suits were put on trial for stealing the Queen of Hearts tarts. A large loud woman who insisted the lowly black suits had her baked goods. Turns out the Knave of hearts nabbed them AND he painted all the white roses red, derp.

“Off with his head!”

And then it was party time with bands and drinks galore. After chatting to my bud turns out each suit had a different interactive experience which was pretty cool. There must be tonnes of rooms!

Make sure you give Alice Adventures Underground a go, who knows where you’ll end up……………. 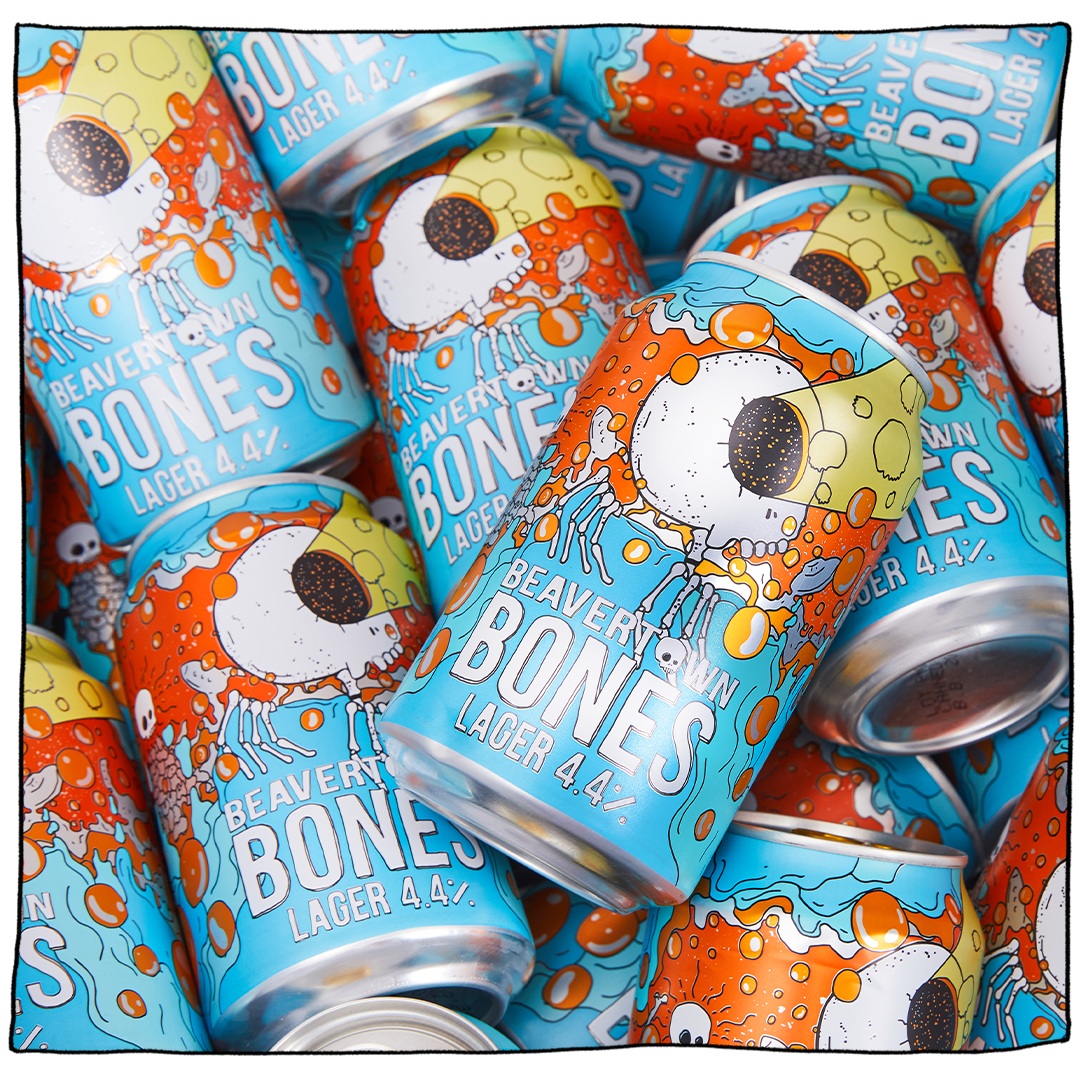