Arm rests and Elbows the WAR! 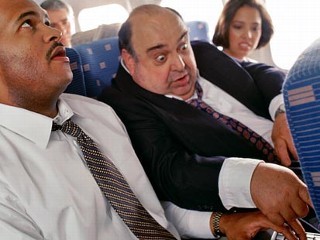 On the Saturday, I arrived to my seat on the plane (headed for Nice) shortly after the person who was to sit next to me. As I sat down I noticed he was reading some financial report and he had claimed the arm rest for himself, not only that but his elbow went over the edge of the rest and into my space. The arm rest on a plane is a valuable thing and there’s not enough room for two elbows on it, and I was not prepared to start a war by asking him to move his elbow off the rest, I just wanted it out of my ribs. But the problem is I’m a bit of a wimp. I wish I was but I’m not one of those people who can yell into a tube carriage and tell people to move down, or to ask someone in the cinema to stop putting their hand so loudly into their tub of pop corn, or in this case to ask this financial enthusiast to get his effing elbow out of my effing ribs.

To ask him would be far too confrontational, so I started trying to give really subtle clues to him. Firstly I moved my entire body forward to get the in flight magazine from the pouch on the back of the seat in front, and as I moved back I made sure that my ribs brushed his elbow so he knew he was in my space. He did not move. I flicked through the magazine looking at the watches I couldn’t afford and made sure each time I turned a page my rib dug into his elbow. He did not yield. I turned to my big brother on my other side who’s favourite pass time is body building and who had also cemented his massive arm to the other arm rest, and being my big brother and a bodybuilding maniac that arm rest was a write off, so I really needed this other one. I used the movement of turning to my brother to make it look as if I was interested in speaking to him, so I could ‘accidentally’ bash this other guy’s elbow out of my ribs, which I did. For about five seconds I was elbow in the rib free and then the arm crept over again.

Was this guy pretending to be reading this financial report just so he could steal the arm rest? Or was he actually reading this report? He also didn’t seem to have noticed at all that his arm had been bashed and he sat there casually as if it was all just normal. I continued to move around, forward and backwards, side to side as much as I could, making sure that I wasn’t bashing his elbow, but more tapping it like some sort of Morse code; basically being as annoying as I possibly could; but this elbow stayed glued to the arm rest and this man’s brain was fixed on his financial report. I decided to actually look at him, thinking that maybe if he saw my eyes or my face he might see my humanity and remove his elbow (a bit how my sister once thought a man next to her on a plane a terrorist and so chatted to him for fifteen hours, not letting him sleep, so he could one be distracted and two learn to see that although she is a Westerner he might learn to see her humanity and decide not to blow them all up) but this man with the annoying elbow did not see my humanity or even look at me and he kept his elbow firmly on the rest and in my space. 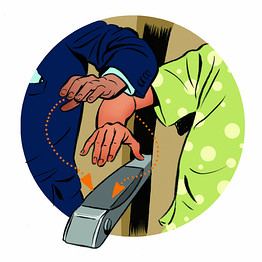 I decided to take the opposite approach and gently rest my elbow against his, really delicately and gently as if one might when one is trying to get contact with someone they fancy. I was hoping he would get worried that I was flirting with him and I left my elbow there, gently against his with a perfect amount of gentle pressure, but he didn’t move and I then started to freak out, thinking that maybe he was gay and he actually liked it! I then had images of this guy rubbing his elbow against mine and then one thing leading to the next. I took my elbow away. I then tried one last thing which was to look at his elbow for about five seconds and then look up at him. Nothing. Well, not nothing. The guy put his magazine away and went to sleep! I sat there pissed off at myself for not having the courage to ask him to move his elbow, and pissed off at him for being so dominant and I decided this would be a blog and I made notes on it. Should I be more assertive? Is it time I started claiming arm rests for myself? Should I call people on their selfish dominance? Should I tell people to move down in the tube carriage (and not just stand in the entrance leaving the rest of the carriage free – URRRGGG!) or to eat their pop corn at a reasonable sound level? Or should I just let it go? By the time I finished my notes I saw that the guy had moved his elbow and the arm rest was free. I put my arm on the arm rest and sat there like a King who’s rightfully been given back his throne; and then I realised it was more comfortable with my arms dropped to the side and not use the arm rest at all.