So I made a turkey!

ONIN London > Food > So I made a turkey! 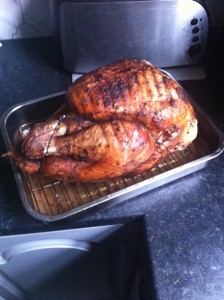 This is a quick post and a massive gloat!! I decided in my quest of the title Foodie I would make a turkey as my first step… No I don’t start small; I thought why not throw myself right in there? I really enjoy eating turkey and this Christmas I had a choice to sit down and eat one made for me? Or embrace the kitchen and make one? So I chose the latter.

My turkey quest started at Asda, I was not sure where to buy one and thought if I am going to get it wrong then I had better start with a cheaper one. So I bought a 7lb frozen turkey from Asda, now this is where the issue started… I didn’t actually realise it took 30 hours to defrost a turkey nor did I realise that a 7lb turkey was a whopper of a bird. I managed to get the turkey to defrost by Christmas Eve which in itself was an achievement, so now to cook the bird; our Christmas dinner was riding on me getting it right as there was no back up. I told my family and friends not to bring an alternative; I was going to provide the bird.

I started making the turkey at 3am Christmas morning, I used honey to glaze it and loads of water and oil to keep it moist. I am not sure if that is how you do it normally but it worked for me; I didn’t follow a recipe as I thought how hard can roasting a bird really be? I fell asleep about a million times making the turkey and my husband even beeped me from work to remind me to take it out of the oven. 5 hours later we had success! The turkey was ready and Christmas would be perfect, look at the picture what a mighty bird it was… 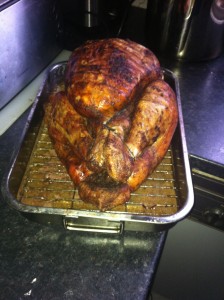 Only thing is that somehow I managed to leave the underside of the turkey raw, it was pink and oozing… I still do not know how I managed it as the fleshy bit was cooked; it was just the bottom that was uncooked. Next time I will use a recipe book I think, but at least the kitchen journey has started.