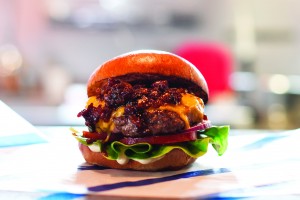 On Portobello Road tucked under the Westway is Boom Burger.  And if we’ve ever been to a food joint that deserves to be a success; it’s this one.  It’s one of those genuine places that you sense is just “right” and the world is a better place for.  We aren’t talking haute cuisine and Michelin starred luxury here; what we are talking about is honest to goodness delicious food that comes from the heart, and from people that care about it and making a success of it.  The only reservation is the concern whether they are charging enough for the food that will allow them to grow and develop the business!  It’s that good; one of those places you just don’t know how they do it.

First impressions aren’t inspiring.  It’s obvious that things have been done (out of necessity I’m sure at this stage) on a shoe string, and it shows in the appearance of the outside.  Unfortunately a shutter is stuck and the front door closes with a concentration shattering slam every time.  Inside is; shall we say; ‘compact and bijou’.  If you want a sit down meal be prepared to wait and bodge up and rub shoulders with others in the know about this delicious and great value food.  Alternatively you can sit at the counter with (on this occasion with a Prince) and watch the kitchen.

That said the atmosphere is convivial, diverse and welcoming to all, with a large number of people coming in to order or collect takeaways. Dub plays at just the right level in the background, and the walls are decorated with Studio One stars record sleeves.  It’s functional, but it has character and is very clean and in good condition.  And it’s clear they are working on getting it better as resources allow; and if the popularity on an otherwise pretty dead Wednesday night is anything to go by it won’t be long.  Of course the location itself is a prime spot for people passing on a market day, and there is lot of competition then too; but we suggest making this the destination and take in the delights of the market as a bonus.

So; we’ve been banging (or should that be booming?) on about making this a place to go for the last three paragraphs without actually describing the food; but trust us it’s worth the anticipation. 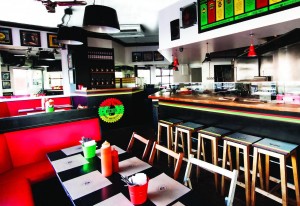 The menu is very limited; very very limited by restaurant standards but remember this is a small burger restaurant that is specialising and it all hangs together extremely well.  Heads up; there are no deserts.  For starters we shared a couple of dishes between us.  The Jerk chicken wings were well seasoned (salty but not too salty), not too spicy, juicy and meaty.  Really delicious.  The Saltfish patties were even more of an amazing surprise:  Obviously fresh with the texture and resistance that good fresh fish gives; and without any overt “fishiness” with just the right amount of chilli and good use of red onion.  Portion sizes were perfect; just right.

Before the main course let’s pause for drinks.  No wine; quite rightly so. The beer is nicely chilled bottled Red Stripe from Jamaica, and a short rum based cocktail list.  There is much merit in doing a few things well rather than a lot of things averagely and Boom Burger have applied that maxim as much to the cocktails as to the food. Boom Burger does what it does extremely well.  It’s a shame that the cocktails come in plastics (I presume kitchen space would make the washing up of glasses impractical); but it adds to the “breaking through” feeling of the place and is quite in keeping with sitting on some beach somewhere.

The cocktails were all spot on – and we didn’t want to be rude by not trying them all.  The rum punch reminded R of Havana.  The Piña Colada was nicely mixed for a dessert alternative, leaving the mind perfectly sated and fuzzy.  However the stand out winner is the Jamaican ‘So Sorrel’.  It worth a trip to Boom Burger just for that. It really is that good.   For those not familiar with the Ribena coloured drink (but there the similarities end) think mulled wine on ice.  But that’s doing it a disservice; the base for the cocktail is home prepared, in their own kitchen, reduced down from a magical mixture.  The end cocktail made with rum is a complex, refreshing and very slightly medicinal brew that goes down so well.  And all the cocktails are made by hand, carefully and expertly in the little tiny bar area.  See?  Do a few things very well…

Back to the main course:  The jerk burger is moist pulled chicken.  It’s different enough from the wings to follow them without you getting jerked-off.  The flavour is a more bitter and smoky one – with each mouthful offering something slightly new.

Don’t be afraid by the reputation for Caribbean food being spiced to the nines.  It’s not here; the recipes concentrate on flavour most importantly, and the jar of really rather good chilli sauce on the table is more than enough for the chilli fiends (M in our case) to blow their sock of with. 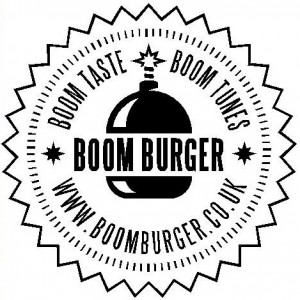 Apologies for the digression; and to the namesake of the place:  The Boom Burger.  I don’t think there is better quality burgers at any where near this price point in London.  The meat is delicious, cooked perfectly to pink.  The fashionable brioche bun is there (bien sur), and that and the meat would be enough for a rave review but the most dee-eee-vine bacon jam stacked on top is genius.  Coincidental to us biting into ours; the lady next to us said it all with her first mouthful, responding with the lean back of the head, sunken shoulders and the roll of her eyes … phwoar!  So tasty.

We had both the usual Potato and the more unusual Plantain fries.  For any New Zealanders looking for flash backs to the famous Dunedin home-made sweet potato wedges with special seasoning these are the ones for you.  On their own they are a little heavier than the potato fries, which were crispy yet still tasted wonderfully of potato rather than the oil they were cooked in.  So if you are in a pair we would recommend having one of each.

Of course all of this is prepared right in the same room as you – the chefs bravely working in the constant observance of their customers. But they are rightly confident – preparation standards were impeccable and having the kitchen right there just adds to the “all in” atmosphere.

In summary then this is a place that will linger on the taste buds and have you trekking back for more on a regular basis.  A small but well considered menu allows something for everyone; all complimented by an atmosphere that is so incredibly welcoming and attentive.  We will return one day soon to try the fish burger and cheese burgers or perhaps a salad – although that addictive bacon jam is already calling!  Did somebody say there is a market in Portobello Road as well as Boom Burger? 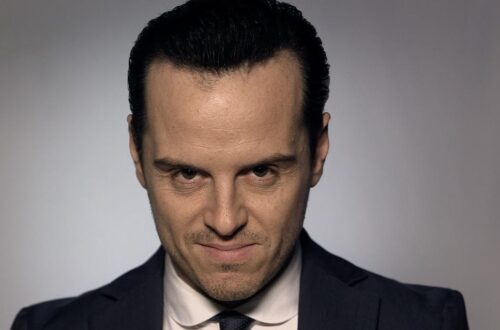 THE MIND OF MORIARTY: LIVE ESCAPE EXPERIENCE THE SEQUEL TO SHERLOCK: THE OFFICIAL LIVE GAME, PREVIEWS OPEN FROM FEBRUARY 2023 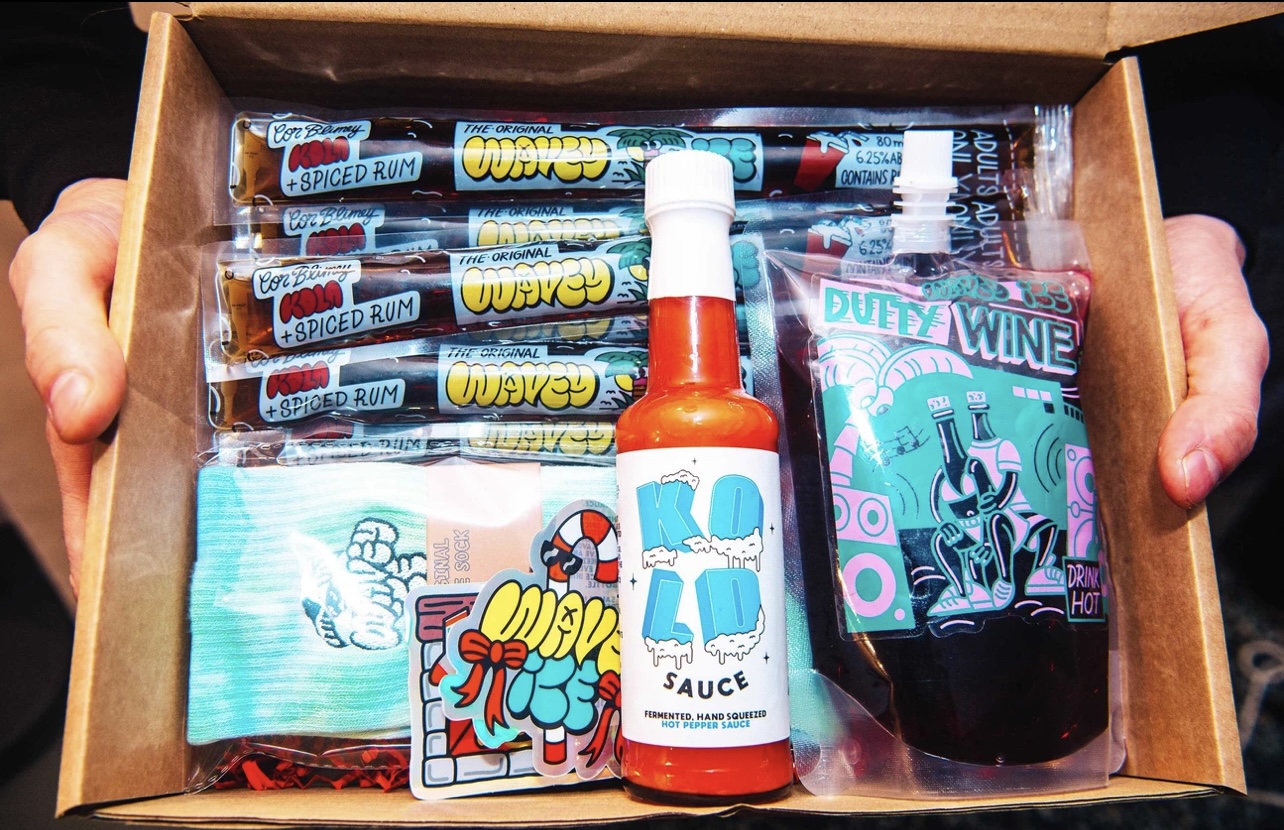 A BOOZY WINTER WARMER HAMPER IS LAUNCHING THIS CHRISTMAS