Well Athena and I have had what you can only call an unhealthy obsession with the Cronut recently.

“A croissant-doughnut hybrid developed in New York by the Dominique Ansel Bakery (@DominiqueAnsel) in 2013, which consists of laminated pastry which is then proofed and fried. They are then rolled in sugar, filled with cream and topped with glaze”

This is what we envisaged when we first got wind of these little beasties…..

However for some time they have ONLY been available in the US. So we sat at work, pining over buzzfeed (@Buzzfeed) and the news, waiting patiently for them to cross the Atlantic.

And then, one day Athena’s (@AthenaSpyrou1) Whatsapp arrived. A news link from the Sabotage Times (@SabotageTimes). They are here. One place. The Rinkoff Bakery (@Rinkoffbakery) in Whitechapel. 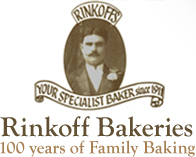 The Rinkoff Bakeries were established in 1911 and produce bakery goods for its own London bakeries and wholesale bakery customers.

So pre-work, I braved the tube (for anyone who knows me they totally understand how hard this was for me) This was the first time in over a year I had got the tube to work!) and headed to Whitechapel.

The only flaw in my plan was the fact that Rinkoff Bakery has two bakeries in Whitechapel. Neither on the main road and one either side of the tube station. Lets just say I went to the wrong one. So, navigation corrected I arrived at my City mapper destination. A suburban street. Magic. So after recruiting a happy helper for directional purposes I rounded the corner of a little courtyard, where they were unloading goods into the back and stumbled upon the Rinkoff Baker. No. 2

And there stood the Rinkoff Bakery. So I popped inside to be presented the Cronut pot of gold at the end of my rainbow. 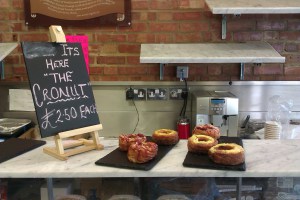 There were great people inside the bakery. I got to meet a regular! A chap donning cycling gear, he recommended the cheesecake. But I had my eye on the prize and £5 later I was bagging one custard and one raspberry Cronut. As I left, the lady behind the counter farewelled with an endearing ‘Bring more people back!’

So I trekked back all the way to Tower Bridge, trying to stem the drooling into my bag with a juicy pink lady and presented Athena with a pristine white box. 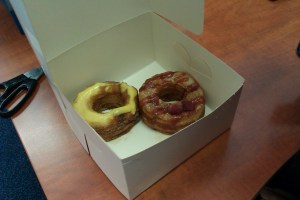 We could hardly contain our excitement. HOWEVER I needed some real food for breakfast so we decided to crack the Cronut box open for our mid morning snack. Therefore the box needed some stringent security measures… So on our break we dashed out into the sun. Took a load of pics to Instagram and stuffed our faces.

As the old saying goes “A Cronut a day keeps the doctor away”, or something like that right? I for one am thankful. Sweet and doughnutty but with layers of crunch and texture, a winning combo I have to say. I do believe they could be the next ‘cupcake’ craze to hit London.

The Cronut has landed.

Check out the Cronut plus other baked goods (think breads, pastries & cakes) at the Rinkoff Bakeries: 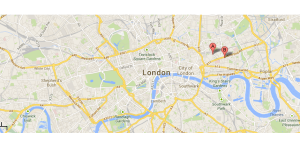