“The First Law of Kipple” an installation by Dan Tobin Smith 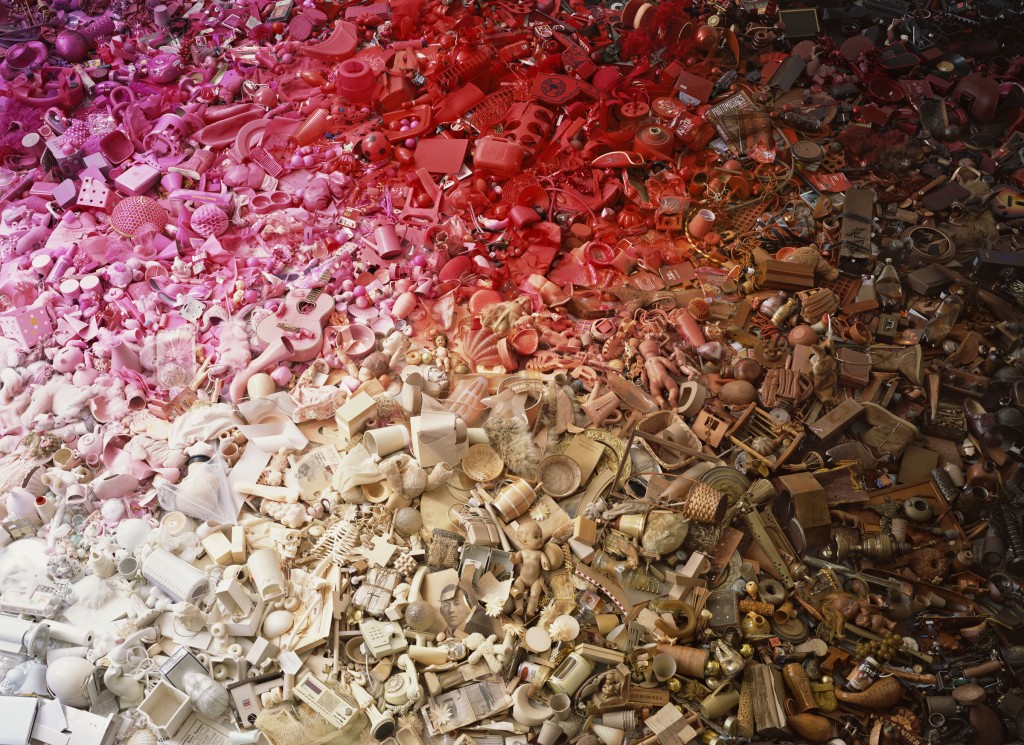 Tobin Smith’s studio in East London will be transformed into a walk-in art installation, the entire floorspace carpeted with thousands of carefully arranged objects, collected by the photographer and donated by the public. The objects — ranging from matchbox-sized to chair-sized — will be meticulously laid out, and arranged chromatically, so that the floor becomes a sweeping sea of graduated colour.

Visitors entering the space will pick their way through the artwork, via pathways laid out amongst the objects. It is inspired by Tobin Smith’s interest in both The Second Law of Thermodynamics and the fictional concept of ‘kipple’, as described by science fiction writer Philip K Dick’s 1968 novel Do Androids Dream of Electric Sheep (later adapted as the film Blade Runner).

Kipple is the detritus produced by human life — the pointless, spent and obsolete stuff that is a by-product of daily life.

“Kipple is useless objects, like junk mail or match folders after you use the last match or gum wrappers or yesterday’s homeopape [newspaper]. When nobody’s around, kipple reproduces itself… the entire universe is moving towards a final state of total, absolute kippleization.”

Do Androids Dream of Electric Sheep by Philip K Dick, 1968

Philip K Dick’s kipple has been described as “domestic entropy” — the physical manifestation of spent and misguided human energy in everyday life. Tobin Smith’s interest in these concepts extends to the production of contemporary designed objects and the need to question their validity in the world. His installation questions the boundaries between beauty and usefulness, luxury and necessity, addressing the epic proportions of material waste created by humankind.

Tobin Smith says: “I’ve been reading Philip K DIck since I was fourteen… that word ‘kipple’ always stuck with me. Everybody has some experience of kipple — It can mean clutter but it also has a psychological aspect because of the way waste or clutter affects you.”

“It inspired me to start thinking about design and products — we make so much stuff but we’ve got limited resources. Often it’s bound up with taste, we think because it’s beautiful it’s okay — but if it’s useless, it’s useless.”

•   The objects are collected by Tobin Smith & from public donations amassed from a social meda public announcement http://www.CallForKipple.com

•   The objects from the installation will be photographed by Tobin Smith to create a series of prints and will be kept in storage and the installation reassembled at future venues around the world.

•   During the exhibition, supper club evenings will be held, with diners seated in the midst of the installation. A menu inspired by ‘kipple’ will be designed by Matt Phelps of Funthyme Dining & Events. A special cocktail will be invented for the occasion by Tony Conigliaro of 69 Colebrooke Row. Wine will be supplied by Guillaume Aubert of Aubert & Mascoli. A limited number of supper club tickets are available here.