What are the two most consumed dishes in Britain and indeed the two dishes most associated with Britain as a nation? The answer, in case you hadn’t guess is fish and chips and curry. Neither of them indigenous to England, nor indeed that old to our shores and yet nationally adored. Fish and chips derives from old Jewish cooking and came in with the late 19th century wave of immigrants fleeing the pogroms in Russia. And curry, fairly obviously, came from the British Empire and the East End’s association with the Indian subcontinent and the British Navy.

The good people at Eating London (@EatingLondon) have been doing their tour of the best food spots in East London for a while now and have whittled it down to a fine selection of truly British and truly delicious sights to take their guests around. 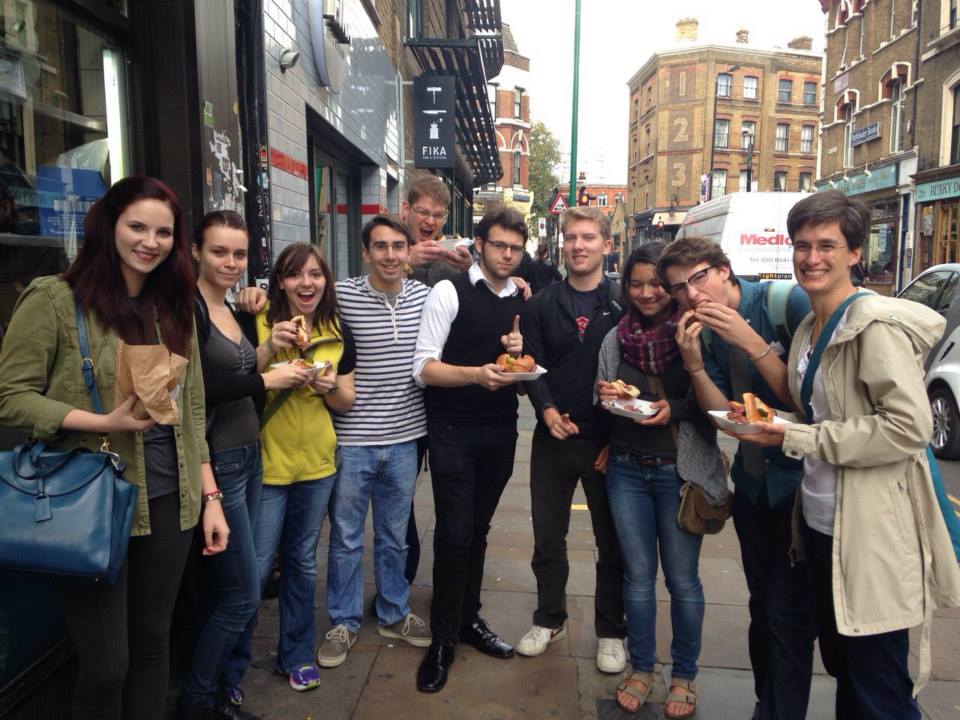 Meeting fairly early on a slightly chilly Saturday morning, there’s really only one way to start the day and that is with the best bacon sandwich in London. St. John’s Bread & Wine, just off Commercial Road cure their bacon in more ways than I thought possible and the bread and ketchup are made on site (none of that Heinz stuff, thank you!). All of which adds up to a lot more than the sum of their parts.

A short walk round the corner to the English Restaurant, which pretty much did exactly what it says on the tin – serves nothing but English delicacies in a restaurant done out in recycled wood from a church that stood just up the road. Perched on our pews and eagerly awaiting the next course we were given a tantalising insight into the history of this particular dish, before finally it was served. Bread and butter pudding was what we were to eat, but not just any old bread and butter pudding. This is made with brioche and served with a brandy and cardamom custard, all of which was mouth-watering. 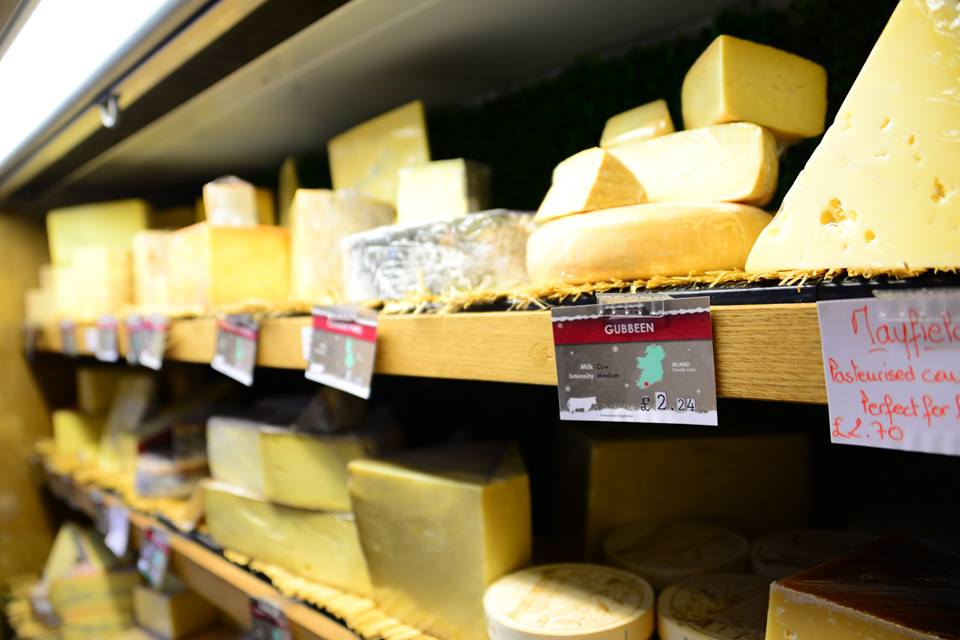 Wondering where we could possibly be going next, we took a short detour around the backstreets of Shoreditch and were treated to a little history lesson on some of the older and most curious buildings around. From Jewish soup kitchens, to pedantically preserved building facades and bomb scarred alleys off we trotted, before finding ourselves back at Spitalfields market and in the House of Androuet cheese shop.

Run by two French brothers (naturally) and home to hundreds of cheese varieties from all over the world, we were there to taste just three and, in keeping with the tour, all English. A couple of different cheddars later and a piece stilton later, we were well and truly inducted into the house of cheese and reminded of how great our native cheeses are. The passion evident in the frères Androuet was really enchanting to see.

The one thing that really struck me about most of the locations on this tour was the extraordinary proximity of them all. None of them was really more than a few hundred metres from the other and the next stop was no exception. Although it was exceptional – there are many places claim to be the best fish and chip shop in the British Isles, but Poppies fish and chip shop, actually holds the 2014 title of the Best Fish and Chip Shop. And well deserved it is too. The fish was battered in a delightful light batter, the chips are proper chippy chips, which is to say, chunky, not uniform in size, length of shape and dowsed in salt and vinegar to the customers liking. 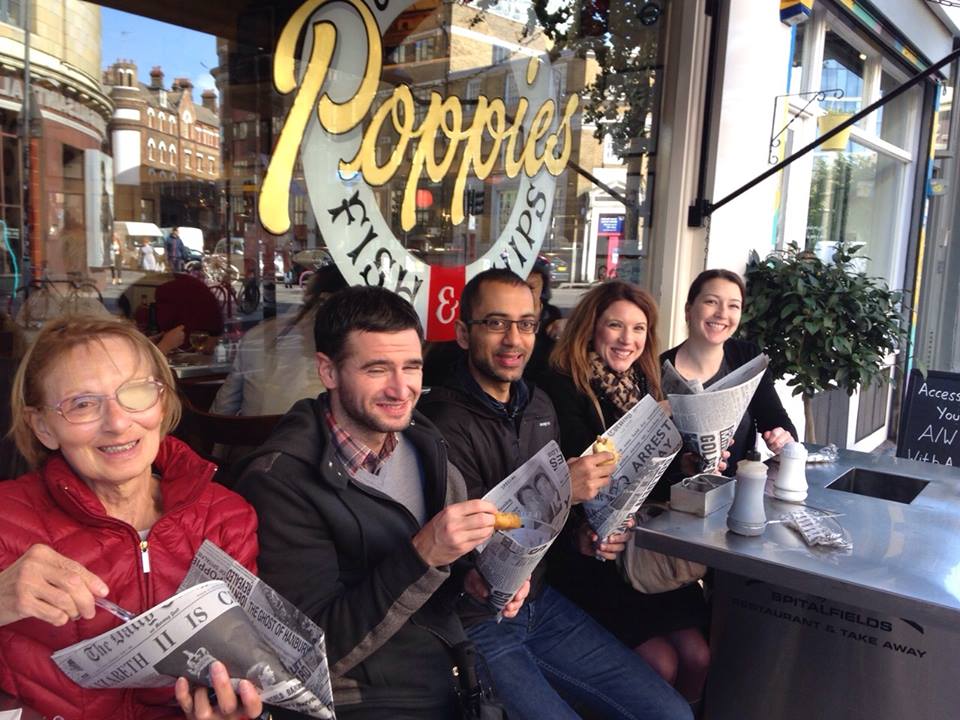 With the time approaching lunchtime and the group becoming in need of a little lubrication, there was only one place we could head next, the pub! The Pride of Spitalfields is a ‘proper East End boozer’, replete with locals, a famous pub cat and the obligatory carpet and wallpaper. It also happens to serve a damn fine selection of ales and cider that have all been brewed in this country and made to old recipes. Being careful to disturb neither the regulars or the cat from their stools, we made ourselves comfortable and sampled a selection of both, before wandering on, leaving the pub as it has been for a very long time.

On to the most recent group of immigrants to arrive in the East End, the Bangladeshis and the famous Brick Lane curry houses. Ushered into, what we were assured, is the best curry house on Brick Lane (it was even visited by Prince Charles!) – Aladdin’s, the contrast couldn’t have been greater or more welcome. We tasted three samples of the delicious curries on offer, mixing meats and vegetarian dishes and also their home made naans. All of it delicious and flavoursome like authentic sub-continental food can only be. 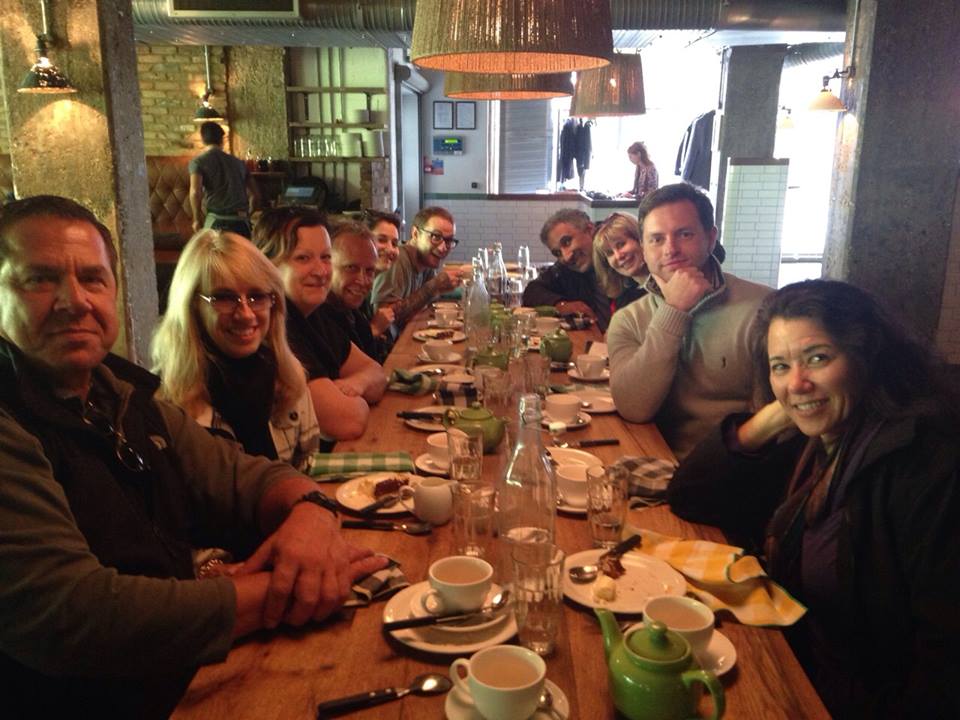 Continuing up Brick Lane, our destination soon became apparent – the famous Beigel Bake at the north end of Brick Lane. Open 24 hours a day, seven days a week and basically only producing one type of beigel, their salt beef beigel, this is a real East End institution that has to be tried. Munching on a massive salt beef, pickle and mustard beigel, stood in the autumn sun and listening to the hum of the city around us, the sense of contentment was palpable.

Having tried dishes from every group and all of us reaching pretty much saturation level, we were in need of some seats, dessert and a break. Fortunately the tour was coming to a well-timed end and dessert awaited. Pizza East, although home to some excellent pizzas, also make a meal salted caramel tart. This was dessert and, again, perfectly judged in size, taste, timing and location. The building Pizza East is housed in, is well worth a visit itself, but add in the excellent food and great atmosphere and you’re really onto a winner. We left the tour there, satisfied, full and having with everyone, even the Londoners, having found somewhere new to come back to. 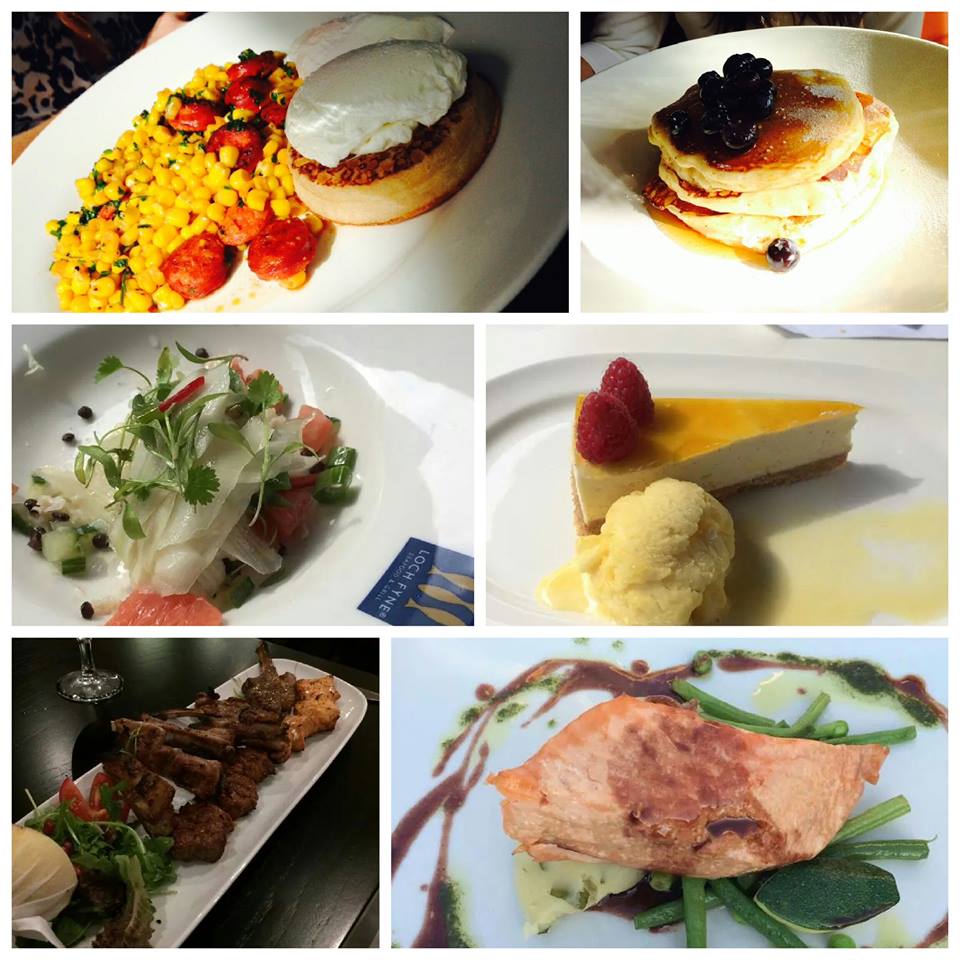 Special thanks to our guide Emily for her excellent knowledge and cheery manner as she guided us through the streets of London.

Eating London can also be found on Facebook, Instagram and here. They’re also operating tours in Rome, Amsterdam and Prague.

How to Manage a Hangover in the Job you Hate 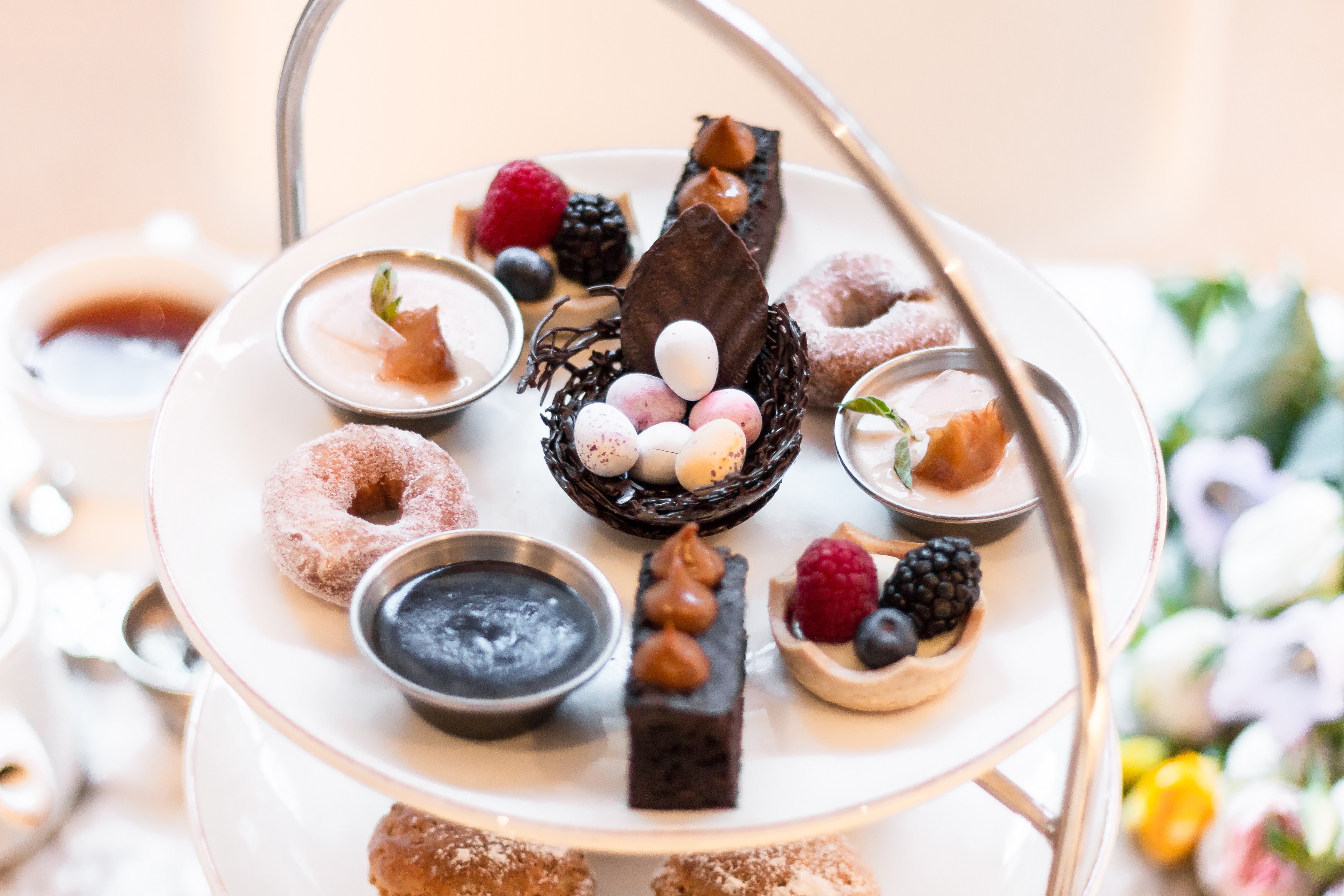 Head to Seven Dials for loads of Easter fun